You should not be shocked that early 20th-century silver dollars are currently popular among collectors because they are stunning examples of US coinage. Most of them choose to buy great coins, which is not as difficult as it might seem. The 1942 half-dollar coin is one of the popular coins among collectors.

The value of a 1942 half-dollar starts at $7.33. The price of a 1942 Walking Liberty half-dollar in good condition is around $10, and higher-quality coins cost at least $30. Be aware that proof coins and those created by the Denver and San Francisco mints will cost more due to their scarcity.

Your currency, which is a Walking Liberty coin, has the potential to be much more valuable. It mostly depends on the circumstance. Thousands of halves were produced in the 1940s, and today you can still get plenty of 1942-dated halves.

The 1942 half dollar is among the Walking Liberty half dollars, valuable as numismatic coins and silver bullion. Although this coin only has a $0.50 face value, some people only buy it for its silver worth. Lady Liberty is shown on the 1942 half dollar's front side.

She is depicted on the coin gliding across the scene while grasping an olive branch in one hand. She is also stretching her other hand in a sideways motion. You will also see that Lady Liberty is rising to the left of the sun, with the sun's rays blazing behind her. Along with the words "Liberty," there is an engraving on the apex that says, "In God We Trust."

The coin's date is located at Lady Liberty's foot. The 1942 half dollar's rear has an eagle perched on a rock that has opened its wings. An outgrowth of a pine branch is on the left side of the rock; this is because it represents power and strength. Inscriptions for the United States of America and "E Pluribus Unum" may be found on the top and left of the coin, respectively.

You will understand that this is an actual 1942 half dollar that you can acquire once you pay attention to these aspects. A first step in assessing a coin's value is to grade it. A 1942 half-dollar in good shape will often be valued well over one in less desirable condition.

This coin is worth approximately its amount in silver in circulating condition; since around August 14, 2022, its silver melt value is $7.52. Proof coins are available with no mint mark, and each one is worth about $500 in PR 65 state. About 21,120 proof coins were produced.

Of course, the worth would be $18 if it is in pristine condition; the value of a 1942 half dollar depends on its condition. In addition, silver is used to calculate its value. For instance, given that the current silver spot price is approximately $25, the silver melted worth of this half dollar is $8.97.

This coin would be worth more than $10 in good condition. Of course, the half-dollar's worth would be $15 in very good condition and at least $18 in extremely excellent condition. Uncirculated 1942 half dollars from the D series will, of course, have a high value. An uncirculated coin with an MS 60 grade will be valued at about $40.

In addition, the value of an uncirculated MS 63 grade coin will be about $80. The S series' worth is the same as that of the 1942 D half-dollar series. That holds for half-dollars with the same grading system in uncirculated and circulated forms. It is the same since the coin's value is determined by its metal composition and weight.

The US Mint created the stunning Walking Liberty half-dollar designed by Adolph A. Weinman from 1916 until 1947. Several coin collectors regard this coin to be the most exquisite one ever produced by the US Mint. You will appreciate the classy obverse, which features Lady Liberty traversing rough terrain encircled by the American flag.

Lady's hand reaching forth denotes hope for a new day, while oak and laurel branches stand for wealth and sturdiness. 1942 was a war year; three mints issued Walking Liberty half dollars. Philadelphia produced the proof coins and unmarked silver coins.

The silver pieces bearing the S mint mark were struck in San Francisco, while the silver pieces with the mint mark D were made in Denver. In 1942, the Mint in Philadelphia created 47,818,000 half dollars featuring the Walking Liberty. With low marks, these half-dollar coins are valued at around $15.

On the other hand, a 1942 Double die reverse coin will set you back a few hundred dollars. Even though the Mint in Philadelphia only produced 21,120 Half Dollar Proof coins in 1942, it was the most since the series' inception.

Since most proof coins were not made available for purchase, it is simple to locate one on the present coin market that is in superb shape. Each salvaged coin made by the San Francisco mint in 1942 is valued at least $9 because of its silver content.

The Denver mint produced 10,973,800 Walking Liberty half dollars in 1942; for $15, you can purchase a piece in reasonable condition. Based on the grade, coins in mint condition can fetch anywhere from $35 to $225 at auction. Many collectors today like to finish a Walking Liberty half-dollar set. 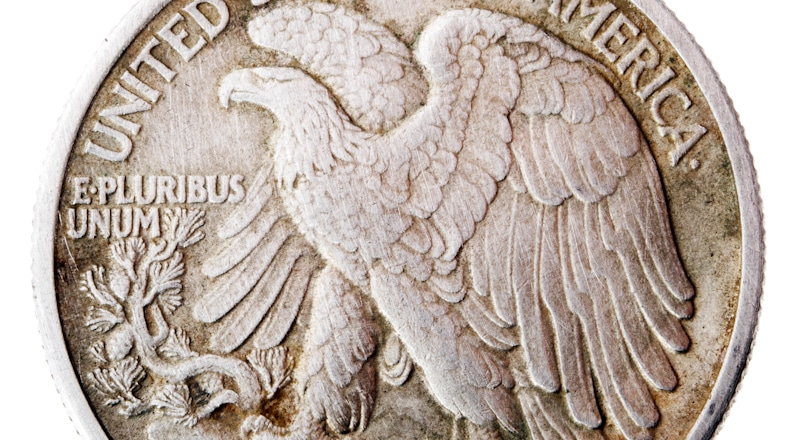 An uncirculated 1942 silver half-dollar coin should be completely undamaged; it should still have the brightness and luster of a brand-new coin in terms of look. A continuous silver-white glow may be seen from rim to rim when the object is angled from side to side. Any circulation-related wear is visible as a softening and blunting of otherwise very sharp features.

The difference between common and rare silver half-dollar coins is their uncirculated state. A coin in "very fine" condition has nice eye appeal; many minor lines in Liberty's dress still stand out as details. Check Liberty's forward-extending arm and the area next to the "In God, We Trust" inscription for wear; it is noticeable but not severe.

The unbroken flatness running from Liberty's head down her foot is remarkable to a "fine" state. Between the eagle's head and chest to its leg, there is a wide, smooth space on the backside.

Liberty is outlined on this antique silver half dollar, which is in "excellent" shape despite being substantially worn. Now, only the big folds of the robe are visible, from her outstretched arm to her foot. Your 1942 half dollar's silver value is what it is worth in this situation.

Given that you consider two factors, calculating a value for the 1942 half-dollar is not that difficult. First, because wide varieties of these half-dollar coins are produced each year, the specific kind you own and its consequent rarity will surely affect the coin's asking price. Second, the quality of the coin will directly affect how much you would be asked to pay.