There have been several perennial disputes among dirt bike enthusiasts about whether a 2-stroke or 4-stroke dirt bike is better. Every rider has their way of comparing the two types of dirt bikes as they have different advantages. Most riders, especially beginners, need to know the difference between the vehicle types.

Several riders are searching for engines that deliver both outstanding handling and power. It is critical for any dirt bike rider looking to purchase a dirt bike to grasp the distinctions between a 2-stroke dirt bike and a 4-stroke dirt bike. 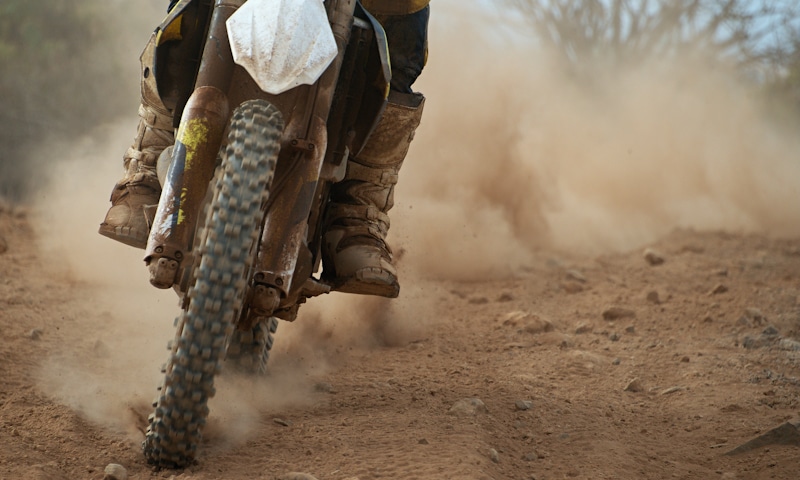 A stroke refers to a piston movement in a dirt bike's engine; it is a stage in starting the engine. There are several ways in which a 2-stroke engine differs from a 4-stroke such as power, handling, and maintenance. Most modern motocross riders believe 2-stroke dirt bikes are a thing of the past.

However, do not be fooled into the opinion that a camshaft-equipped bike is better than a modern two-stroke. Dirt bikes equipped with four-stroke engines have the upper hand. To help them compete, they quadrupled the displacement allowed for a two-stroke engine.

It became evident that the 4-stroke had an advantage for a few years, and sales skyrocketed while pre-mix remained on the shelf. 2-strokes hit the rider fast and hard, producing an explosive impression. 4-strokes are less intense and provide the user an option in how they want to ride the bike.

Because the 4 stroke's power is a little more user-friendly, it has a distinct advantage. A decent suspension setup and numerous aftermarket items can fix many handling concerns. Naturally, the four-stroke bike is heavier than its standard cousin. The 4 stroke's additional weight and tractor-like power make any 2-stroke feel light and nimble.

How To Ride A 2 Stroke Dirt Bike Vs. 4 Stroke

Although there is a clear distinction between a 2-stroke and a 4-stroke engine, it is crucial to remember that a 2-stroke engine equals a larger cc 4-stroke engine. There are relatively few dirt bikes with low-cc four-stroke engines on the market. Generally speaking, an expensive dirt bike is one with a higher cubic centimeter.

The simplicity of 2-strokes offers its own set of advantages and disadvantages. On the one hand, these motorcycles are lighter, nimbler, and require less maintenance because they do not have valvetrains. Even when compared to 4-stroke dirt bikes, they place more demand on the remaining engine parts; therefore, their maintenance regimens are substantially shorter.

Finally, there is the matter of lubrication. Riders on 2-stroke dirt bikes should mix their fuel and oil ahead of time to keep their engines cool and oiled. Modern transfer-port-injected (TPI) dirt bikes, with their separate oil reservoirs, make this easier, but longer journeys still necessitate bringing along oil bottles.

What Is A 4 Stroke Dirt Bike?

A 4-stroke dirt bike refers to a dirt bike that functions on a 4-stroke engine. A 4-stroke engine is more sophisticated and has four major functions; exhaust, compression, intake, and combustion. It only ignites each two crankshaft revolutions, resulting in predictable and more consistent power delivery.

In addition, 4-stroke engines provide a smooth powerband, making them easier to ride and perfect for beginners. A 4-stroke dirt bike is more suitable for trail riding than a 2-stroke engine since they have more regulated power and require little effort to operate. Since the 4-stroke engine has more working components, you will spend less time thinking about shifting, clutching, and braking.

A 4-stroke dirt bike requires less maintenance and is perfect for trail riding or racing. However, due to their added parts, they are significantly heavier, and in cases when maintenance is required, it might be costly because there is usually more to fix. Regardless of their low speed, 4-stroke dirt bikes have higher power even at low speed.

Regarding emissions testing, a 4-stroke engine is a fairly clean burning engine because they are more fuel-efficient than 2-stroke engines and do not require mixing oil with fuel to function. Due to their greater number of pieces, they are also more difficult to clean; they produce more torque at lower RPMs.

A 2-stroke dirt bike is undoubtedly faster than a 4-stroke dirt bike. Combustion and compression are the two primary operations of a 2-stroke engine; the engine will ignite the spark plug for each crankshaft turn in a straightforward method. Compared to other heavier bikes, a 2-stroke bike is lighter in weight.

A 2-stroke and a 4-stroke dirt bike have their advantages and disadvantages; it might be difficult to choose which to get. Since none is technically superior to the other, it all depends on personal preference. However, before deciding, consider the maintenance cost, top speed, your riding experience, handling, comfort, and bike size. With these factors in mind, you will make the right choice.