Winter should not stop you from having fun with your 4-wheeler; although you cannot operate an ATV in the snow, there are other ways of having fun with a 4-wheeler. There is a way to have fun while working; during winter, it is necessary to clear out the snow. If you have an ATV snow plow, you get to clear the snow while operating an ATV.

Using a 4-wheeler snow plow is exciting and fun; once you try it, you will look forward to doing it again. ATVs can move much snow in a short period; you might be able to push more snow with an ATV than you could with a tractor. 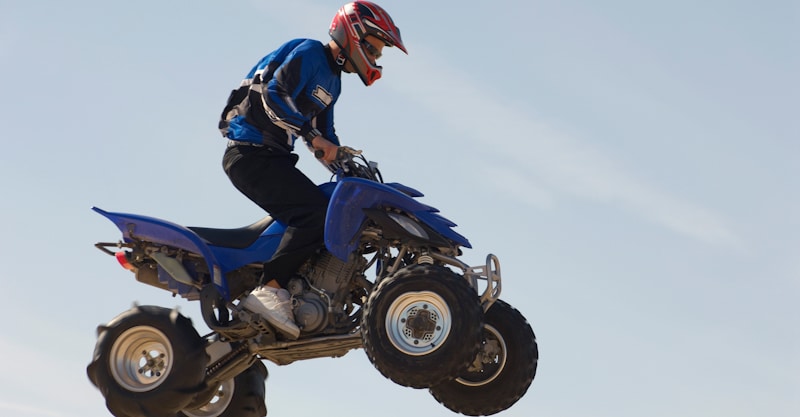 ATVs are strong vehicles that may be used for various tasks, including hauling large freight and clearing snow. With so many possibilities, picking the finest ATV for snow removal and plowing might be difficult because manufacturers do not make ATVs expressly for snow plowing. Hence, there is no ATV that comes with a plow; however, there are ATVs that you can use for plowing.

The Honda FourTrax ATV Snow Plow is a fantastic alternative for snow removal, even though its features are not as stunning as those offered by other industry-leading four-wheelers. The motor on this Honda ATV is a liquid-cooled 518cc, 4-stroke, single-cylinder engine that weighs 630 pounds.

It also has torque, a speed-sensitive electronic power steering system, and an electric shift program. The electronic differential lock on the FourTrax helps boost traction on slippery roads, and the Traxlock technology lets you select when to use the 4-wheel drive and 2-wheel drive. It uses a user-friendly electric reverse system.

Its wet-clutch, beltless transmission is one of the most efficient and reliable. You can shift gears with its ESP by pressing a button; without a drive belt, there is no cause for worry about high power loss or a slipping belt. The Four Trax's high and low sub-transmissions make it suited for slow-speed utility jobs with significant torque.

The Kawasaki Brute Force ATV has enough power to plow through more than 8 inches of snow with ease. Its 54-inch plow system and warn pro winch are available as accessories for this ATV. Because its 749cc engine produces up to 42.7 pounds of torque at 4750 rpm, you will not need to employ the vehicle's full power potential for snow removal.

The Polaris Ranger is expensive, but it offers unequaled power, comfort, and toughness. It boasts of a Pro-PTV heavy-duty clutch system, a 32 percent bigger drive belt, and a fuel-injected electronic 999cc engine for reliability and life. Its electrical power steering makes it easy to operate, even at low speed, when conducting manual tasks.

It can haul up to 2,000 pounds and has a payload capacity of 1,500 pounds, making it suitable for a day's labor, whether plowing snow, carrying logs, or transferring big things. Loading and unloading are a breeze thanks to the strong tailgate automotive-style grip and latching mechanism. Do not be deceived into thinking this ATV is only useful for work.

The Polaris Ranger comes with a three-position, user-selectable throttle control that lets you choose between three modes: Performance, Work, and Standard, so you can use it for work during the week and hit the trails on the weekends. Additionally, the 27 inches Maxxis tires give unequaled traction and puncture resistance and can handle any terrain.

There are a variety of snowplows for 4-wheelers available right now. All of them will accomplish the same fundamental task, but the amount you are willing to spend and what you expect from the snowplow, some are better than others. Below are some of the best snow plows for 4-wheelers.

The Black Boar Snow Plow, unlike most ATV snow plows, is a universal fit that claims to suit most 4-wheelers with a round or square tube frame. The 48-inch straight blade has nine adjustment positions and can be used in both right and left directions. To operate the snow plow kit, you will need a winch, which is not included.

The blade is attached to a strong, black powder-coated steel frame with fast-release pins that make it simple to remove and replace the blade. The lack of a winch for this snowplow saves money and eliminates the need for unnecessary parts because many machines come with a winch pre-installed.

It comes with an angled push round tube which provides a maximum plow lift range.

The Warn Provantage ATV Snow Plow is the factory accessory plow because it works very well and is of exceptional quality. The blade, frame, and mount are all sold separately, and it is best used with a Warn winch. This snow plow has been tested on a Honda Rubicon ATV, and it worked well.

The mounting plate provides a sturdy skid plate for the engine and uses the machine's frame for structural support, implying that the entire machine is capable of pushing snow. This Plow falls when overloaded, and the finish is long-lasting, withstanding several seasons of heavy use while still appearing new.

The frame, universal mount, and blade are all included in the Extreme Max UniPlow ATV Plow system. Although this Plow might not fit every ATV on the market, it can be used on several ATVs. Extra mounts are also available to make switching machines easier; it has a blade that is 50 inches long.

Although it lacks a winch, the Kolpin Switchblade ATV Plow is full-featured in a box. This plow kit's stamped steel blade technology can adjust to a width of 48 inches or 60 inches. The sturdy square tube steel chassis features strategically placed reinforcements for longevity and convenience.

This product's box and packing make it simple to transfer it to your vehicle's back and assemble it afterward. This is a universal and full ATV plow system that comes with everything you need to get started plowing right away in one easy-to-use box. This Plow is ideal for paved driveways and walkways, but it is also capable of cutting through dirt roadways.

If you have a fuel-injected ATV with decent traction and power steering, you can easily tackle a snow-covered driveway. All you need to do is install an ATV snow plow to your vehicle, and you will easily plow the snow rather than shovel it by hand. However, vehicle weight and engine size determine how efficiently your ATV will plow the snow.