As a new drone pilot, you must know all the types of drones before flying any. This makes you have a better understanding, and you will know when to use a drone with geofencing and use one without geofencing for any project. We will provide the insight you need in this article.

Most manufacturers use geofencing in drones to track the geographical areas and boundaries in drones. It is also used to ensure drone pilots or users obey and observe the drone law, especially the no-fly zones.

Manufacturers of geofencing drones use navigation satellite signals to automatically help prevent drones from flying close to restricted areas such as prisons, airports, nuclear power plants, and other areas.

Although geofencing in drones is for safety, it can also obstruct some professional projects, which is why some companies and manufacturers create drones without geofencing.

Before you can fly over a restricted area, you have to take permission from the government to avoid any troubles or payment of fines.

Which Drones Have No Geofencing?

Some drones have no geofencing restrictions, and although it is not recommended, it is needed for some situations and projects that entail the view of a restricted area.

Most people use drones without geofencing to produce movies, make commercials, do projects, and sometimes for recreation and other personal purposes.

Some of the drones without geofencing are:

This drone’s flight time is forty minutes and can go for a maximum of 5.59 miles. The cost of this drone is a thousand and five hundred dollars.

The Autel DragonFish can fly for a maximum amount of a hundred and twenty minutes. It can fly for a distance of 18.6 miles and costs over a thousand dollars also.

This drone’s flight time is for twenty-five minutes and goes for a distance of 1.2 miles. Its cost price is nine hundred dollars.

The Autel Kestrel can fly for up to two hours and go for a distance of sixty miles. Its cost price is close to two thousand dollars.

Out of all the drones without geofencing, this drone’s flight time is the lowest for twenty minutes. Its range is two hundred and sixty-two feet, and its cost is eight hundred dollars.

Like the Autel X-Star Premium, this drone has a twenty-five-minute flight time. It costs three hundred and fifty dollars, and its range is 2624 feet.

If you desire to get a drone without geo fencing, you have a choice to make from these six drones. Presently, there are a limited number of drones without geofencing. However, manufacturers are looking into creating more drones without a geofencing restriction.

Does SkyDio 2 have Geofencing?

No, the SkyDio 2 does not have geofencing, but it does have an inbuilt GPS. The SkyDio 2 is a very safe drone for drone pilots even though it does not have a geofencing restriction. This drone’s inbuilt GPS enables an autonomous flight experience with some features that allow it to follow a signal or fly to a point on the map within the SkyDio 2 application.

The SkyDio 2 GPS has many advantages that make the drone safer to fly. One of the advantages is that if there is trouble launching a strong GPS signal, you will receive a cautionary message on the application telling you that it would be dangerous to fly.

During a flight with the SkyDio 2, if you lose track of the drone’s location, you can direct back to your location or a home point you can set on the map through the application on your phone. This is another advantage of using the SkyDio 2.

The SkyDio 2 has obstacle detection and collision avoidance sensor technology as a part of its features. This drone was designed to be one of the easiest drones to fly and the less likely one to crash.

Another advantage of the SkyDio 2 is that it does not rely on your cellular data for its GPS signal. Although you need to turn on your location service when flying the drone, it can still fly if you do not have an active data plan.

The video quality of the SkyDio 2 is very great. It flies very smoothly and has a very sharp and terrific camera. This makes it more suitable for professional filming.

Because this drone has many quality features even though it is small in size, it has various uses, which includes:

The SkyDio 2 was launched on October 1st, 2019, and has since been known worldwide for its exquisite features and functions. When it was released, a lot of professionals and drone pilots fell in love with the drone.

Does Mavic Mini have geofencing?

Yes, Mavic Mini has geo fencing. The DJI industry is the manufacturer of Mavic mini. When the DJI first introduced the Mavic mini drone to the public, it does not need to be registered except when it is to be used for commercial purposes. One of the Mavic mini flaws at that time was the inability to unlock the geo zones. 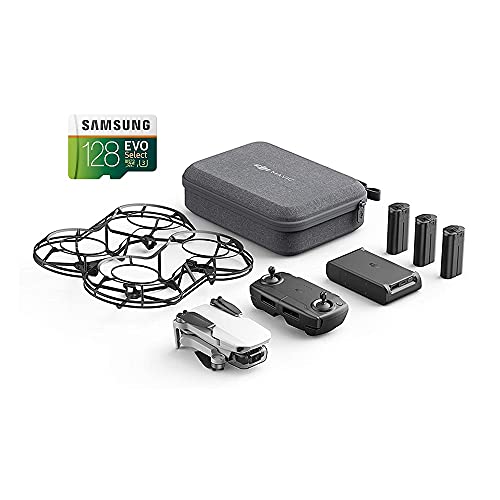 However, recent updates on the drone took place in the company, which produced some special features. The first is the ability to unlock the geo zones, and the second feature prevents you from piloting the drone when the GPS signal is weak and the environment light is too weak for one to operate or fly the drone safely.

The Mavic mini drone is one of the best drones for new drone pilots prone to losing a drone during flight; hence a compass calibration was implemented as another feature.

Other features of the drone include:

The Mavic mini drone can be likened to an average smartphone in weight as it weighs below 250 grams. This makes the drone portable and easy to carry everywhere you go.

The drone is also easy to use as it provides a flight tutorial that helps provide the knowledge required to pilot the drone. It also has an intuitive and simple user experience.

In the United States and Canada, you do not necessarily have to register the drone with the government because it is extremely lightweight. You can enjoy a flight time of thirty minutes with the Mavic mini once the battery is fully charged. 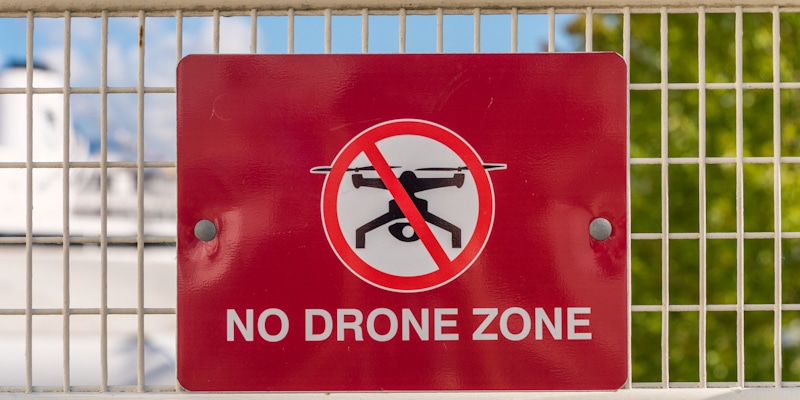 How Geofencing Helps Keep You Out Of No Fly-Zone

Depending on each country, there are some areas called the no-fly zone. This means those places are out of bounds for drones due to various reasons. Because of this, most drone manufacturers make drones with geofencing.

First, we will look at what geo fencing or geofence means.

A geofence is like a virtual or unseen fence, otherwise known as a perimeter around a physical location. So when an object enters or tries to leave the perimeter, something happens. This is a basic explanation for what a geofence is.

However, geofencing is more complex than that and has a different meaning in different contexts. Nevertheless, we are talking about geofencing in drones, so our focus will be on this.

Geofencing in drones is used as a fence for a restricted or sensitive area. It is also used to confine a drone on a specific mission. So, geofencing is used to prevent a drone from entering or leaving a particular area.

When you direct your drone into a no-fly-zone, it recognizes the area as a no-fly-zone and hits an invisible fence, and it turns back. This is caused by geofencing. Geofencing makes the drone resist entering a no-fly-zone.

Geofencing also helps keep a drone from venturing into prohibited air space, mostly for safety purposes. This prevents your drone from crashing. When you venture into a fly-zone in your country, you will be given a warning and are most likely fined by the government.

The reason for geofencing is to reduce the chances of accidents in restricted airspace. There have been series of incidents where airplane pilots had to take emergency procedures because a drone pilot chose to fly his drone in an airport (restricted airspace).

Geofencing is added to drones either with a drone component or through the mobile application controlling the drone’s flight. Drones designed to support geofencing download database from the manufacturing companies, which indicates areas that are actively restricted.

A drone with geofencing helps you know when you are entering a no-fly-zone or a drone prohibited area so that you can change the direction of your drone.

It is safe to say knowledge of drones, and geofencing greatly influences your choice of drones. While it is important to have a specific reason before purchasing a drone, you also need to understand the laws that regulate the flying of drones in the area you are located.

Although your budget and the purpose you have are the main determinants of the drones you can purchase, you also need to consider whether a drone with geofencing will be a preferred option or not.