Drones seem to be built to survive in almost any condition. This is why some people have conducted experiments to see if there are any conditions that’ll actually have a negative impact on whether a drone can fly. One such condition that’s been tested is drones flying in a vacuum.

Since your drone will need to displace air downwards to take off it can’t be flown in a vacuum. Regardless of how much you throttle your drone up it still won’t be able to take off. This is the same thing that will happen to a helicopter if you try flying it in a vacuum.

The Science of Flight

The first thing you need to realize is that a drone’s propeller is a wing – similar to what you’d find on an airplane. When air flows across the wing areas of high and low pressure are created. This is what helps the drone lift off the ground. Known as Bernoulli’s Principle it simply means that higher air travels over the top of the wing creating low air pressure while lower air travels under the wing creating high air pressure. The end result is that the drone is pushed upwards.

The angle of the propellers is responsible for driving air downwards. Normal air has enough resistance that a propeller gets pushed upward. This essentially means that all of your drone’s weight is held up by its small, spinning blades.

Unfortunately, when you’re dealing with a vacuum the air will no longer function in this way. This is why the propellers won’t be able to lift the drone off the ground.

Now there are some drones on the market that have fixed blade propellers. With these drones the faster its motor runs the faster its propeller spins which will in turn help to create the lift that’s necessary to get the drone off of the ground. Simply put, when there’s more power there’s more speed. Of course, there may eventually come a time when the propeller will start spinning so fast that it will no longer be able to move the air around it efficiently. However, this isn’t a point that most people and their drones will ever reach.

When you own one of these drones you’ll see that there’s a small number that’s located on your remote control. This number will provide you with a live readout of your motors’ RPM (revolutions per minute). The stock set of the Mavic Pro’s RPM has your drone rotating at around 6,000 RPM whenever it’s hovering. However, when you’re flying you’ll need to be between 300 – 1,200 ft ASL (above sea level) when your drone first takes off. When you’re at different elevations, there’s a different temperature, or there have been changes in the humidity level these things will all affect your RPM. In a vacuum, all these changes (e.g. air density, altitude) will not only make it harder for your drone to take off but these things will also make it harder for you to fly your drone. 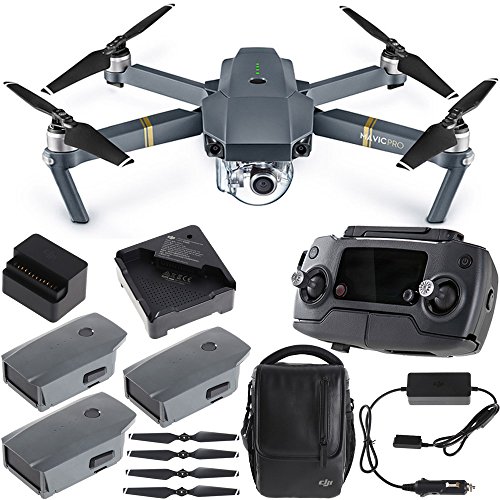 The angle of Attack (a.k.a. Pitch)

In order for your drone to maintain flight, its propellers have to stay within a specific range of angles. Simply put, this means that your drone’s blades have to be able to continually push air downward.

When your blade is flatter it’ll have an easier time moving through the air. This is why you’ll typically find these types of blades on lower-end drones that have low-power motors. With these drones, the motor will need to spin faster so that lift is created. However, it’s easier to obtain speed with them.

With more aggressive blades you’ll need to have more torque in order for your drone to be able to spin through the air. However, these drones’ blades will have more lift but they’ll also spin slower. This can be beneficial in that you’ll have more power and be able to fly your drone at a higher level but doing so will eat up your battery quickly.

It’s also important to understand that the more surface area your wings have the more potential they have to lift off under normal conditions. Remember, a vacuum isn’t normal conditions so your wings are fighting against other forces that prevent them from working properly to begin with. This is especially true when you have a thin-bladed propeller because it’ll need to spin faster to create an equal lift of a wide-bladed propeller. This is why thin-bladed propellers struggle even more when it comes time to try to launch them in a vacuum.

Typically, drones have two blades attached to their propeller. This is similar to what you’d find on an airplane (two-bladed propellers on small aircraft three or four-bladed propellers on larger airplanes). The more blades a drone has the more surface area it’ll have per rotation.

This is similar to what happens whenever you stir water. As the water starts moving faster and faster in a circle it’s more difficult for you to make any type of an impact on it. For you to have the most impact on the water it’d need to be sitting still. So, when you’re just starting you’ll have more splash than when things start moving around quickly. It’s at that point that you’ll have minimal impact and any movement you do make is simply to keep up with the water’s flow.

This is an example of how propellers work once they’re in the air. When a propeller has two blades it will have a harsh impact upon the air while three and four-bladed propellers will have a smoother impact. This is why a four-bladed propeller can create a cyclone of air more easily. However, each rotation’s effectiveness will eventually be reduced. This means that a two-bladed propeller is more agile and when you start adding more blades the flight will grow smoother except when you’re in a vacuum. Of course, regardless of where you’re flying your drone things like motor power, control sensitivity, and lag all need to be factored in as well. However, the fact still remains that when you’re flying your drone you’ll need the best balance of conditions – something you’ll never achieve when you attempt to fly your drone in a vacuum.

Space is considered to be an almost perfect vacuum because it’s nearly completely devoid of matter. To be able to fly a drone in space it would need to be fast, flexible, able to move in all spaces (including a vacuum) and need very little energy. Unfortunately, today’s drones can only work in the Earth’s atmosphere so they can’t be used in space (or in a vacuum).

Kennedy Space Center is working with NASA to create a prototype drone that can work outside of Earth’s atmosphere and environment. To charge this drone it’d need to return to the mother ship. Nevertheless, they’re hoping to be successful so that they’ll have a way to reach all surfaces on a planet, especially those with more than a 30-degree angle or volcanic sites that are full of holes. These are areas where the classic rovers that have been in use for years are unable to reach.

Since these drones would need to be able to move in a vacuum they’d use gas nozzles or water vapor instead of a rotor. They’d also use the same gas as is found on the planet or asteroid that they’re designed to explore. Designers are hoping to fill these drones with enough fuel so that they can reach their default location. They’re hoping that this will be a much more efficient means of exploring life in a vacuum.

What Happens to Drone Propellers That are Mistreated

There’s a lot of wear and tear that happens to propellers as they spin. If you bump into a wall or your drone falls from the sky they’re also highly likely to be damaged. This is surprising when you stop to consider what an important job they have. Fortunately, they aren’t very expensive ($10 – $20 for a larger drone).

When you think about all the chips and cracks that may happen while you’re flying your drone, you shouldn’t only be considering how they reduce the effectiveness of your drone’s propellers. You never know when a piece of this propellor may come off while your drone’s motor is operating at high speed. If this happens, the bit of plastic that comes off of your drone will serve as a high-speed projectile. This isn’t something you want to get hit with nor do you want anyone around you to get hit with because then it becomes a liability. In fact, it could be so dangerous that you could cause someone to bleed or need stitches. At the very least it could cause someone to get a welt or a big blister.

The simple way of answering whether a drone can fly in a vacuum or outer space is to think about the fact that there isn’t any air in either of these locations. Unfortunately, drones do need air so they’re able to fly or even take off from the ground. This is because air resistance creates the thrust a drone needs to be able to stay in the air. Since all air is removed from a vacuum chamber the drone won’t be able to fly any longer.

Drones aren’t like rockets either. With a rocket, you can launch one in any atmosphere and it’ll still move forward. This is one of the reasons why scientists are working on creating drones that are specifically designed to work in outer space. These drones will need to have similar physics to rockets.

It’s interesting that since drones appear to be built to fly in any condition some people have pondered whether they can be flown inside a vacuum. Unfortunately, drones need to displace air off in order to take off which is why they can’t be flown in a vacuum. Remember, this is the same thing that’ll happen with a helicopter too.