Any object freefalling from the sky onto the ground can wreck damage – based on how high its starting point in the sky was or the pace at which it descends, and also its size. Parachutes were invented to cut down on this descent pace, and helicopters employ a similar concept called "autorotation". So, do or can drones autorotate like a helicopter too?

Auto-rotation is a technical concept, and to understand why it's not a design feature in drones but only helicopters; it's crucial to take a deep-dive into the subject. In this article, the concept of "autorotation", its significance, why drones do not have the function, why helicopters are capable of it, and much more are discussed at an in-depth level.

What is Auto-Rotation, After All?

Autorotation is a helicopter's main rotor being driven by aerodynamic forces instead of traditional engine power. It's akin to a fixed-wing airplane's gliding flight. When in autorotation, the helicopter descends as there is no forward thrust that the aircraft usually gets from its main rotor.

Autorotation is possible in a helicopter due to the "freewheeling unit" that allows the primary rotor to turn continuously even when the engine is turned off or fails. The freewheeling component is a unique clutch mechanism that can disengage each time the engine's rotation speed is lesser compared to the rotor moving speed. The relative wind's aerodynamic forces also help maintain rotor pace.

When or At What Point Autorotation Takes Place?

Autorotation usually kicks in when the aircraft's engine fails. If it's a two-engine helicopter, both engines should have failed for "autorotation" to kick in. Auto-rotations, however, could also be carried out when the tail rotor fails.

How important is a tail rotor to a helicopter? A helicopter's tail rotor provides a couple of essential functions.

When the engine fails, the drag aspect rapidly decreases the rotor speed. If the speed goes down below a certain RPM (revolutions per minute), the rotor will come to a halt altogether. As a result, the helicopter will descend right away, creating an upward airflow via the rotor setup. The flow of air via the rotor modifies the drag-and-lift vectors along the blades' span but keeps them turning.

This offers the necessary thrust to ensure the rotor rotates throughout the helicopter's descent while producing some lift at the same time. All of this ensures the helicopter lands at a slower pace and doesn't crash badly.

The Significance of Autorotation

Without autorotation, helicopters could touch the ground a lot more precariously after their engine power is suddenly cut off due to malfunction or some other reason. Though the landing won't be as safe and smooth as it would be with a functional engine onboard, "autorotation" ensures the helicopter doesn't get damaged when it lands without engine power.

When a helicopter lands with "autorotation", the rotating blades' stored-in kinetic energy helps decrease the descent rate and renders a soft landing. An increased quantity of rotor power is needed to prevent a helicopter with a high descent rate compared to the rotor energy required for an aircraft that's dropping a lot more slowly.

If not for "autorotation", a helicopter would simply descend to the ground with no absolute control when its engine fails, crashing badly as a consequence.

The autorotation descent rates in helicopters are usually 1,500 to 2,000 FPM (feet per minute). It could be higher in a few other aircraft. Generally, a helicopter's successful landing is contingent on the aircraft's height and velocity when autorotation begins.

A few other factors ascertaining or impacting "autorotation" include:

Not to mention, the element that primarily controls the descent rate is "airspeed".

During autorotation, a helicopter stays fully maneuverable. A combination of airspeed alterations and/or turns could be employed to modify the flight direction and maneuver the helicopter to a more suitable landing spot.

Not to mention, all single-engine helicopters should demonstrate "autorotation" capabilities to procure a type certificate or exhibit how capable the airplane is concerning its design. 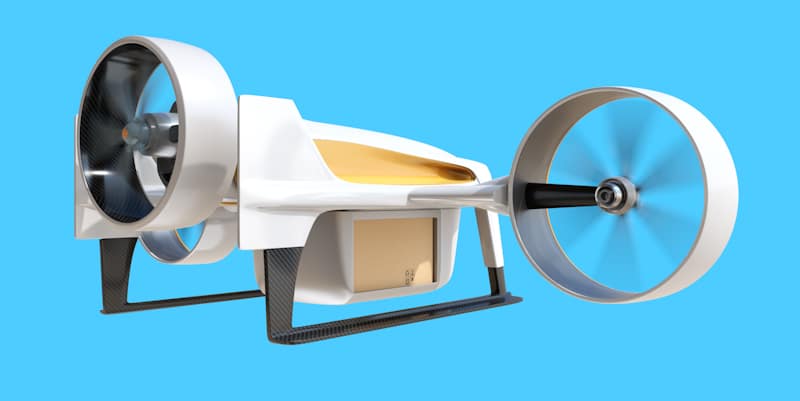 With a GPS and a joystick, operating a drone is quite similar to playing video games. The user-friendliness of drones has contributed significantly to the growing popularity of these uncrewed aircraft among recreational drone users.

However, underneath the user-friendly interface and controls is a gyroscope lie an accelerometer and quite a few other complex techs that work in unison to ensure a smooth and controlled drone flight.

To appreciate them, you should know what they help achieve. But before that, let's talk about the most critical component of them all – rotors.

A drone has four rotors, and it needs them for its "upward", "hover", and also "descent" motion.

The rotors comprise a propeller attached to the device's motor, which helps the UAV (uncrewed aerial vehicle) hang or stay suspended in the air or work against the gravity that pulls at it. The phenomenon is referred to as "downward thrust". The thrust must be equal to the pull of gravity working against the aircraft.

To ascend, however, the rotors must create an upward force that's greater than the gravity working against the flying device. "Descent", on the other hand, entails the drone pilot doing the opposite of "climb" and decreasing speed.

For "hovering", two rotors rotate clockwise, and the remaining two move anticlockwise, making sure the drone's sideways momentum is in proper balance. To mitigate unusual vertical movement, two rotors spin faster than the other two. The rotors spin at an increased speed also when the drone moves backward and forward.

Other Important Elements/Aspects of a Drone

Rotors are at the core of a drone's flight, as clearly explained above. However, a few other features or components also help ensure the optimal functioning of the crewless aircraft. They are:

All of the above-mentioned drone engineering is intricate, which most consumers have no clue of.

Drones and Autorotation, How do drones auto-rotate?

As mentioned above, drones cannot do autorotation (almost all of them). Drones come with fixed-pitch rotors, which are optimized for "thrust", and not autorotation. When there's no engine power, a drone's rotors do not autorotate.

They instead stop to swivel the way they should and just windmill in the opposite direction. The windmilling causes the drag and decelerates the drone's fall to an extent. But that is nowhere close to the effect "autorotation" can achieve with helicopters.

Moreover, the blades of a drone are much smaller compared to a real aircraft's fins. In other words, they are not big enough to amass an adequate amount of energy to pull off the deceleration. A much better option would be equipping the drone with a parachute or a similar deployment tool or mechanism.

Most drones do not come with an integrated airbag. But there are third-party accessories that equip commercially available UAVs with a parachute. Installing the same, however, may require professional assistance. A parachute-like mechanism won't guarantee a crash-free, safe landing. It would, however, help avoid a splat.

Unlike a conventional, full-size helicopter, a drone doesn't have any onboard crew. Therefore, loss of life or severe injury to individuals is not a concern with drones that have their engines ceased mid-flight.

However, the quadcopter landing as safely and gently as possible is still important because the extent of damage to humans or property could be significantly decreased when the freefalling quadcopter descends and crashes into people and critical property.

Claiming that a drone looks or functions like a helicopter is not hyperbole. But the two are not the same.

A drone, as mentioned above, uses four rotors. A helicopter uses just one central rotor. The blades of a helicopter, as a result, are much bigger compared to the small set of fins a drone is usually fitted with.

Flying a drone is easier than an RC (radio-controlled) helicopter, thanks to the former's robust software support. An RC helicopter typically has no onboard software or one that has minimal functionality.

And courtesy of the software, drones can fly by themselves, including in scenarios where the pilot has lost actual sight of the UAV. Because helicopters are so lacking in the software department, it's critical to keep the aircraft in real-time and complete control at all times during the flight.

You can use drones for a variety of functions. You can attach a camera to a drone for filming or grabbing shots of locations that may not be accessible otherwise. As alluded to earlier, drones are also being used in some regions for delivery purposes. Though RC helicopters can be outfitted with cameras, they still are not as versatile as a drone.

But because drones are so capable and advanced compared to RC helicopters, they are also subjected to more laws and regulations. The FAA (Federal Aviation Administration) has listed them all here.

Considering all of the above, drones cannot transport people – at least, not like real helicopters can. Though there are drones, such as the EHang drones, that are big enough to transport humans, the word "drone" by definition is still an uncrewed aircraft controlled remotely or from the ground.

Any crewless aircraft is a drone. A drone need not look a certain way or fly in a particular manner to qualify as a "drone". A helicopter, on the other hand, should float a certain way to be called so. 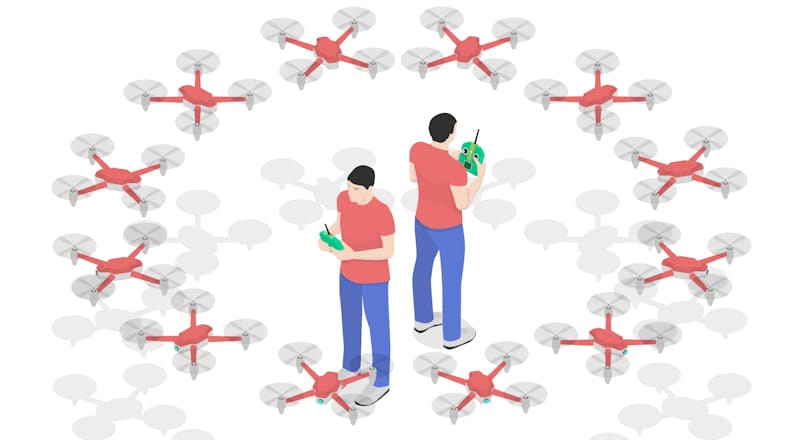 Drones have come a long way ever since their inception. There are now more drones than there were only a few years ago. Also, people are now much more knowledgeable about drones and what those compact, uncrewed aircraft can or could be used for.

E-commerce companies such as Amazon, which made public its plans to deliver products to their customers using uncrewed aircraft, have contributed greatly to the people's increased understanding of drones and their practical applications. Not to mention, the innumerable videos floating on the Internet of drones capturing aerial perspectives of landscapes have also added to the awareness of or ubiquity of UAVs.

The uncrewed aircraft, however, is still not as advanced as it can potentially be. The flight time, for instance, is one aspect that the industry needs to focus more on. "Anti-collision light" is another thing that's missing as standard in drones, which in turn would need increased battery power.

As discussed throughout the article, there is certainly no "autorotation" capability in drones – at least not at this point.