Drones are growing increasingly popular among videographers and also people who fly them recreationally. The aspect that, however, hasn’t become quite as widespread is proper drone flying skills. And if it’s icy outside or the weather isn’t ideal for flying a drone, even the most experienced drone flyers’ skills get heavily tested.

You can certainly fly a drone in below-freezing temperatures, but not without the hurdles. The obstacles are likely in the form of battery heating/draining problems, drone motor functionality issues, ice cover and the subsequent defrosting, loss of sensitivity in your hands due to the cold weather.

If you live in a part of the world where winter is more than just cold weather or the season is synonymous with snowfall, do not take your drone out during those colder periods of the year. But if not flying a drone when it’s freezing outside not an option, keep reading to know what you can do about that.

Why Flying a Drone in Extreme Cold is Not Ideal?

Drones do not fancy extreme conditions. They are, in fact, not designed to withstand the extremeness of their physical environments. Here are some of the primary reasons why that is the case:

Drones run on battery – a lithium polymer (LiPo) cell, to be specific.

For the uninitiated, cold temperatures and LiPo batteries do not mix well. In other words, when the battery’s temperature falls below 50°F (10°C), the drone’s performance drops. And when the temperature plummets further, around 20°F (-7°C) or below, major functionality issues crop up.

The colder the temperature, the quicker will be the battery’s discharge rate. That translates to lesser or diminished runtime and reduced top speed. At times, the battery will discharge power 50% faster than usual. There’s also the possibility of the battery dying cold turkey, causing the drone to crash suddenly.

And if you try to charge the drained battery when it’s cold or hot to the touch, the battery’s stress will be more, and its shelf life will be shortened further.

Icing is a Major Issue

Snow is terrible for drones, like how it’s for helicopters and planes. When the snow builds up on your drone’s propeller blades, it increases the device’s weight and negatively affects its aerodynamic traits.

When the snow accumulated on the drone dissipates, it leaves behind a thin layer of liquid on the body. When this water cover freezes due to exposure to cold air, it turns into an ice sheet, covering a much larger drone surface than before.

The sustained cold environment created by the ice cover hurts your drone’s sensors, causing drifting issues or making the drone less responsive to the control inputs. Moreover, the moisture could short out or damage the drone’s motor, camera, or gimbal.

Besides the fun element attached to flying a drone, most people fly drones to grab some cool aerial shots. And if you’re working on a project for a client or your own venture, the footage taken with the drone matters even more. The overcast sky and relatively darker environment will result in some underexposed shots or images during the extremely cold weather.

So, It’s Not Possible to Fly a Drone in Harsh Winters?

As mentioned earlier, it’s not impossible to fly a drone in below-freezing conditions. You must, however, be prepared or make necessary arrangements before trying to execute the crewless flight.

Prepare the Battery for the Extreme Cold

Flying a drone in icy weather conditions is war unleashed on the drone’s battery. Therefore, make sure the battery is up for the challenge.

Suppose the drone’s battery lasts 20 to 25 minutes in warm weather or ideal flying conditions. In that case, the run on a single charge could drop to anywhere between 10 and 15 minutes in snowy conditions. Conditioning the battery beforehand could help achieve better run periods.

Since batteries don’t perform like normal in extreme cold and charging the battery when it’s hot is not an option, keep extra batteries at the ready. Swap the drone’s batteries after every five to 10 minutes of flight or based on your drone’s mileage.

Swapping discharged batteries with fresh batteries is time-saving and takes much little effort compared to taking the old batteries out, waiting for them to cool down before a charge, and biding time while the battery is fully charged to roll again.

Keep the additional batteries in a safe, cozy place. Place them on your car’s dashboard, and set the window defrosting to high. For increased heating, let your vehicle point toward the sun. If it’s freezing outside and there’s no sun to be seen, get a battery warmer/heater instead.

Since the cold weather comes hard on the drone’s battery, it’s sensible to keep the flying time short. If you’re using the drone to shoot scenes, plan.

The exact flying minutes you could extract out of the battery on a single charge would depend on the conditions and the battery itself. If the battery is fully charged and in good condition, 10 minutes (or more) of flight time is possible in 20°F (-6.66°C).

To not push the battery to the brink or to mitigate mid-air crashes, do not fly the drone for more than two to three minutes at a stretch. The maximum flight period should be 5 minutes – of course, based on what your drone’s claimed runtime is. Experiment a bit and check what flight times are realistically possible. Generally, 2 to 3 minutes should be fine for most drones.

If you see ice covering the drone’s propellers, abort the flight and attempt a landing right away to wipe and dry out the drone’s body and propellers. Be mindful of the landing and the take-off spot(s), as the propellers could kick up a significantly large quantity of snow when the drone is close to the ground.

The below-freezing temperatures will make your hands go cold and numb. A pair of hands with a lost sense of feeling could impact drone operating skills. It’s, therefore, recommended to wear proper winter clothes and have the necessary gear, such as special winter gloves and/or hand warmers. The gloves will ensure your hands stay warm and sensitive to the controls.

Why Fly Drones in the First Place When It’s Too Cold Outside?

Warm weather conditions and brightly lit natural settings are perfect for flying drones. Flying a drone when it’s raining, snowing, or extremely cold is not ideal. But then most drone users, particularly the ones who use drones for professional assignments, do not head back into their abodes right upon seeing a snowfall.

They go ahead with their plans due to project requirements, closing deadlines, etc., despite knowing how tough and possibly hazardous it can be to fly a drone in icy environments.

If there is critical data to be collected, like a topographic survey, a more friendly environment may not provide the information needed. In such cases, the icy weather conditions that represent the place’s natural environment are preferred.

How to Grab Excellent Drone Shots in Extreme Cold?

As mentioned above, overcast skies and snow could mess with the camera settings of your drone. Luckily, you may overcome the hurdle by reducing your camera’s shutter speed and tweaking the white balance.

Most drones even come with white balance presets such as “cloudy” and “sunny” that automatically adjust the settings. If you’re not happy with the auto settings, manually changing the coordinates is always an option.

Also, monitor your ISO if it gets darker. If the ISO has to be set above the device’s range, shoot on another day. Very high ISO numbers could introduce excessive grain or noise in your shots, which would make the footage unusable.

Another thing to consider is the drone’s speed. Besides hurting the battery, increased speed could also cause motion blur, which also is problematic. Reduce the speed by 1 to 2 mph for minimal distortion in the shots. 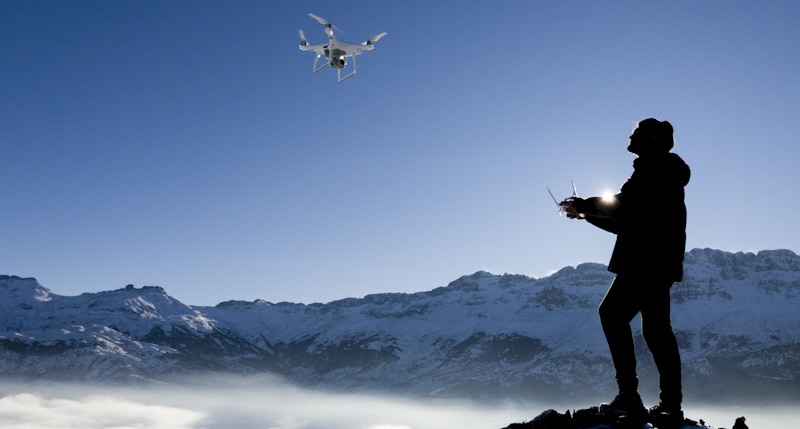 Drones can be great fun when you use them in ideal weather. Winters are not usually friendly to drones, and when it’s bitterly cold, flying a drone becomes less fun and more of a challenge.

But if the goal is to capture the splendor of winter, the beauty of snow-capped hills, etc., you must find a way to overcome the weather-related challenges. Fortunately, with some thought and preparation, using the drone during wintry conditions is not as difficult as it’s made out to be.

Just be wary of the things that tax your drone and its battery, such as prolonged high velocities and excessive maneuvering, when flying in the cold.