Drones are fun to play around with, and the footage they capture can be even more exciting to look at. But drones cannot be used anywhere, anytime, and there are rules and guidelines in place that ascertain responsible drone usage. So how are the drone flying rules in Houston and the state of Texas like?

Since Houston is a large metropolis, flying a drone in the city is not allowed. But there are locations near the area where drones can be operated, including state parks and lakes. Though those sparsely populated regions are drone-friendly zones, you’ll still need permission from the authorities.

If you live in Houston and are a drone user, you should have some idea of the city’s drone laws. But if you are an outsider or someone visiting Houston for a brief period with your drone, the following piece of information is just what you need to stay clear of the authorities. Even if you are a resident of the city, don’t skip this as the information could still be enlightening.

The following drone flying rules do not just apply to Houston or Texas but all states. Being aware of these stipulations is crucial to fly a drone in Houston or some other place in the country.

Kindly note, the above rules apply only to recreational flyers. If you are a commercial drone pilot, refer to FAA’s official website for pertinent information.

Flying Drones in Houston – The Laws and Guidelines

Both local and federal rules come into effect if you’re considering flying a drone in Houston or any city or region of Texas.

But before attempting to glean and comprehend the various state and city drone usage guidelines, ascertain whether you are flying your drone recreationally or for commercial requirements.

The following are two critical pieces of information you should know as a drone user:

Recreational drone pilots should conform to specific other guidelines and procedures. Foremost of them is clearing TRUST (The Recreational UAS Safety Test). Without a copy that proves you’ve passed the test, you may not be able to fly a drone in Houston, Texas.

In case it’s not already apparent, “recreational drone usage” is flying the UAV (uncrewed aerial vehicle) for personal enjoyment or fun. Flying the drone should not have its monetary benefits. In other words, there should be no business or commercial motive behind the activity.

Flying a drone for commercial purposes includes things such as:

Non-monetary value or goodwill could go down as “indirect compensation”. It includes things such as volunteering to offer drone shots of a coastline for a non-profit organization.

Some drone laws apply to the whole of Texas, and that includes Houston. Not to mention, these laws were drafted by the Texas Legislature.

The law pertains to telecommunication service providers, permitting them to use drones for capturing images. The drone should be at least 25 miles (40 km) away from the U.S. border for security reasons.

The southern part of Texas shares its borders with Mexico and the Gulf of Mexico. The rules, however, do not apply to the boundaries shared with New Mexico, Oklahoma, Arkansas, and Louisiana.

Under this law, insurance companies can also use drones to snap pictures for business requirements, provided the drone pilot is FAA-authorized.

The HB 1424 // 2017 law mitigates drone operation over or near detention centers, prisons, and critical infrastructure in the state.

“Critical infrastructure” could denote any facility that’s fenced or has some form of a physical barrier (such as barbed wires) or warning sign (danger signboards) to prevent intruders or unauthorized entry. They include:

The law also forbids using quadcopters over a stadium or sports venue. There, however, are exceptions to the case.

The law pre-empts local governments from modulating drone use in the state, except during a special event or when a specific locality or community is using the UAV. Special events could be a celebration, festival, or any other gathering of people.

The particular law allows individuals with a specific background, such as the military, to shoot images using drones as demanded by their jobs. The images, however, should not be of a person who could be identified through the picture. The U.S. military, for instance, could shoot images with a drone for a drill, operation, or mission.

The law lists out 19 legal ways to use an uncrewed aircraft, including drone usage in airspaces designated as a test site by the FAA, their use in oil rig protection and pipeline safety, etc. The law also marks “using unmanned aircraft or drones to capture stills” and “having drone-captured images” as illegal.

Flying Drones in the State Parks Near Houston

When talking about drones or drone footage, natural parks pop up in most drone user’s minds almost instantaneously.

The areas surrounding Houston have more than just a few state parks. Some of the ones worth mentioning are listed below (along with details on how far they are from the city of Houston and the time it takes to reach the location by road):

Kindly note, the parks mentioned above are not open to drones without prior consent. As per the state’s rules, drones are not allowed over or near these parks without a proper permit.

San Angelo State Park and Lake Whitney are the only two sites where you can operate drones without the authorities’ permission. Unfortunately, those two locations are not part of the Houston region.

Fortunately, getting a permit to fly drones over any of the parks mentioned above is not a complicated process. 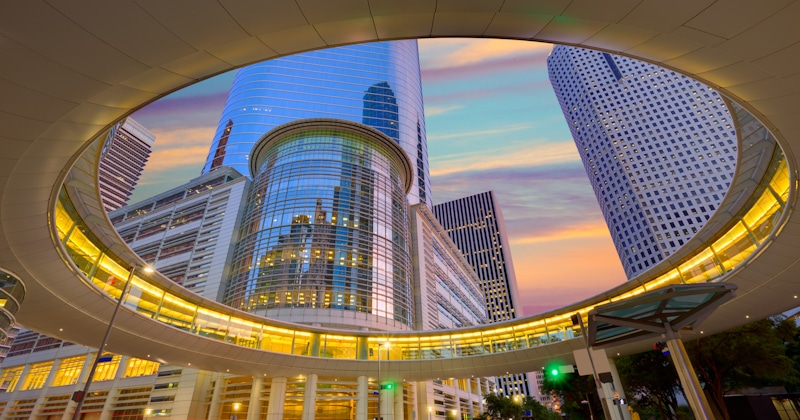 Houston is the biggest metropolis in Texas and the fourth most populated city in the country. As drones are usually not meant to be operated anywhere near the general public or critical infrastructure, flying a drone in the heart of Houston is pretty much out of bounds.

But if you move away from the city a bit and look for sparsely populated regions, options are galore. The state parks mentioned above represent just a tiny portion of the locations around Houston, which you may explore with your crewless aircraft.

If you have the time and patience, you could find and explore some unchartered territories, making for some exclusive content. Just make sure you are on the right side of the law – whether you are flying drones over parks or any other site. The airspace is quite regulated all around Houston, and not just the city.