The Federal Aviation Administration (FAA) has control over the airspace in the U.S. It determines which public/government properties it's okay to fly a drone near or over and where it's not allowed. So, is a dam a no-drone zone, according to the FAA?

You cannot fly a drone over a dam – particularly the ones labeled as "drone-restricted properties" by the FAA, such as the Hoover Dam and the Folsom Dam. Drones are usually not allowed near dams for security reasons. But some people sneak into the space and steal some cool dam shots.

Airspace is highly regulated in the U.S., with zones above specific territories controlled even more. To learn about why dams are no-drone-fly zones, what your options are regarding the same, and other pertinent information relating to the topic, keep reading. 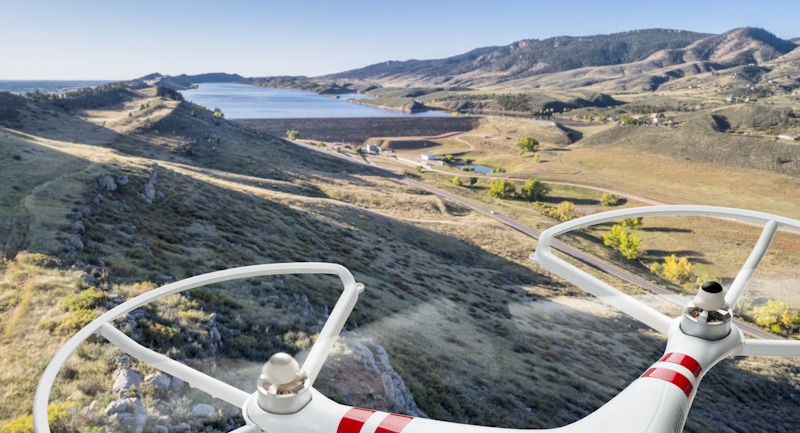 Flying Drones Over Dams and the FAA

The FAA issues rules (and updates them) for drone usage around important U.S. landmarks, including dams – whether the drone usage is commercial or personal/recreational.

But not all dams are considered landmarks. As per the FAA, the following dams are "landmarks" or heritage sites, and flying drones within 400 feet from them is restricted:

The FAA continually adds locations to its no-drone zones, including airstrips and airports, sports stadiums, army bases, national parks, etc. Dams have historically not been part of these no-fly zones. Things, however, are changing – clearly indicating the FAA's strong stance against flying drones around essential utilities.

Despite the restrictions, some of these dam sites may permit drone flights. Get in touch with the particular facility's authorities and also coordinate with the FAA on the issue.

Drones and the Hoover Dam

Drone captures of the Hoover Dam are not difficult to find online. But this doesn't imply it's okay to capture aerial shots of the human-made structure.

The aerial perspectives of the dam circulating online are most likely stolen. This begs the question: If the footages are illegal, why have the authorities not taken them down yet? Perhaps, the concerned officials have not gotten to the matter or are plain slacking.

Moreover, the law on piloting drones over or near dams is not clear, and that ambiguity can leave quite a few confused or use the loopholes to their benefit.

For instance, drone flying laws in the U.S. state it's not permissible to take drone shots of dams within 400 feet from the dam up. This signals to people or some drone users who choose to misinterpret the rule and intentionally assume it's okay to fly the drone 400 feet or above from the dam.

Those who've been flying drones for some time or even have a basic understanding of drone laws would know flying a drone above 400 feet from the ground is illegal. This technically means flying a drone over a dam is impossible. But because some people conveniently choose to ignore the other aspect of the law, the Hoover Dam drone shots are not so rare to find on the Internet.

If you think you can choose to purposely misread the rules and fly your drones over the Hoover Dam or any dam in the States that falls in the FAA's drone-restricted zone category, you are getting into some legal trouble.

And it doesn't matter whether you're a local or just visiting the place; the laws shall apply to all uniformly. Not knowing the rules of the place is no excuse.

Registering the Drone with the FAA

Besides seeking permission from the concerned authorities to fly a drone near the dam, ensure your drone is registered with the FAA.

Registering drones with the FAA was not mandatory earlier. However, with drones' growing popularity and increased drone accidents, and safety-related problems rising, the governmental body has made drone registration compulsory.

Registration, however, is not needed if the drone weighs less than 0.55 pounds (250g) or is not bigger than your hand. But if a small-sized drone is more than half a pound in weight, it should be duly registered as it ceases to be a toy.

If you're registering the drone for commercial operations or to license the cool aerial videos shot using the drone, you may have to observe a few more protocols. Your client or employer's details, corporation or local government permission, etc., will be needed.

Do not worry about the various procedures or the complexities attached to them, as you will most likely be guided by your employer or client throughout. If there's no one to help you, you probably do not need a commercial drone pilot license.

What If the Drone is Not Registered?

If a drone that needs registration is not brought to the FAA's knowledge and you happen to fly the unlisted drone near a dam or any other place, be prepared to face the legal consequences.

The violation will cost you some serious money and may also get you slapped with federal charges. The punishment could be a fine of several thousand dollars to even imprisonment for several years.

Kindly note, flying an unregistered drone is a criminal or civil offense – irrespective of whether you're flying the UAV over a dam or any other place where it's permitted or not allowed to fly a drone legally.

Registering a drone is pretty straightforward. You can do it by mail or online. It's, therefore, not worth skipping the step if you own a drone and plan to use it recreationally or for your professional commitments.

Merely registering your drone and getting it labeled isn't enough to comply with the FAA's rules.

Always have the registration papers on you each time you go out to fly your drone near a dam or any other location. If an officer stops you from flying the drone and asks for the drone's registration details, having the papers at the ready will be handy.

Showing the registration details on your phone may also work, but it's always safe to keep the hard copies handy as the mobile Internet connection in the flying area may be weak or non-existent. Since dams are usually located on the outskirts, mobile Internet signals can be hard to come by.

Your drone registration papers are like your driving license. Like how it's second nature to carry your license each time you head out to drive, always keep the drone papers within reach if you're taking your drone out for a spin.

General Rules for Flying Drones in the U.S.

Besides the aforementioned, dam-specific guidelines to fly drones, here are standard rules/laws you must be wary of and follow when flying your drone near a dam or any other place:

The FAA is your friend to know everything about drone-flying in the USA – be it near dams, schools, public parks, or any place you suspect piloting a UAV may not be accepted or against the law.

Visit the site regularly to keep checking back every once in a while for the updated rules and guidelines. Most importantly, get your drone registered and fly the drone only if you know how to manage the aircraft and have a license to show.