Drones are touching our lives in every way we can imagine. They are used for learning, fun, commercial, and security purposes. However, as its use cases evolve, it is pertinent to tighten the noose around the areas where these UAVs can be utilized. One type of regulation that is under adherence includes the places where drones can fly. As power plants are sensitive areas, it is essential to look into the aspects of drones flying near power plants.

FAA restricts drone flying over Nuclear Power Plants. The regulatory commissions instructed the airmen to avoid the restricted airspace. Drone pilots were asked to follow suit in 2019. The States have set varied legal precedents for drone flying over critical infrastructure, making it pseudo-legal.

Why Drone Flying is Restricted Over Sensitive Areas?

While there are several use cases (to be discussed ahead), the restrictions are imposed for the risk to public safety and potential danger to the infrastructure. Concerns have been lingering around about the sinister utilization of drones.

One of the major concerns is that drones can be easily used by terrorists for surveillance and attacking any place without the pilot ever coming close to the target area. Moreover, traditional radars and surveillance systems cannot detect drones as they fly closer to the ground and have a small size.

Even if the drones are intercepted, it is difficult to track their pilots and pin them down in the limited time frame. Until now, drones have become an instrument of destruction barring a few incidents that lead to power failures due to unintentional accidents. But this cannot account for the fact that drones may not be used for more damaging and planned missions to destabilize the critical infrastructure.

Uncertainty and the potential of drones to cause damage are the most significant risk factors that lead to the drafting and implementation of regulations. Several drones flew over 13 nuclear plants in France in 2014, and no one has been caught to date. This was the alarm that triggered the US Nuclear Energy Institute and influenced it to take action in this regard and prevent such incidents from happening in the US.

Power plants constitute a vital infrastructure of any country. Any damage to the power supply can thwart the routine in every respect. Hence, if a drone has the potential to disrupt this vital infrastructure, it must be regulated adequately. Those concerned with the risks posed by the drones share that they can be used to gather information about the power plants and even deliver heavy payloads.

As a result, the FAA announced a set of regulations that instructed the recreational and commercial use of drones. Within these regulations, two sections are imminent and directly relate to the usage and flying of drones over critical infrastructure, Section 2209 and 2210.

These sections specifically cover critical energy infrastructure, oil refineries, chemical facilities, and amusement parks. Section 2209 imposes these restrictions, and Section 2210 shares the process to be followed for availing an exemption to fly a drone near sensitive areas. The FAA primarily authenticates these exemptions.

Can I Go To Jail For Flying a Drone Over Power Plants?

Even though the answer to this question depends on the State you fly the drone in, most states have strict regulations for flying drones near critical infrastructure. For instance, in Arkansas, you can be charged with Class B Misdemeanor for flying around critical infrastructure, which translates to Unlawful use of unmanned aircraft systems. Subsequent violations can lead to being charged with a Class A misdemeanor. Similar regulations are enacted in Delaware.

The Federal government has set nationwide regulations for drone flying. In support of these regulations, the State governments are also contributing towards making the sensitive areas within their limits safe and secure. To this end, we can see some differences or relaxations in drone flight patterns around these areas.

On the other hand, Tennessee narrows down the list of probable sensitive areas to five types of establishments, including all sorts of power plants. Hence, the US Drone laws mark the areas that are a no-fly zone and provide the penalties for breaking the rules.

Other activities related to these installations that can land you in jail include interfering with the emergency workers. The emergency workers may already be dealing with a sensitive issue, especially if they are doing some damage repair work in nuclear power plants.

In this case, disturbing or interfering with their work that can potentially put them at risk is an offense that cannot be ignored. Also, impeding aircraft and other relief procedures in the affected areas can lead to a fine.

Some Incidents where Drones were Reportedly Flying Over Restricted Areas

Both these terms (critical infrastructure or sensitive areas) can be used interchangeably. Flying a drone over any area marked with these two tags is restricted or regulated depending on the State. Despite the regulations stated by the FAA, there have been several reports of drone sightings over these areas, including the gas, coal, and nuclear power plants. Not only this, there is evidence to show that there were 57 drone incursions from 2015 to 2019 over 24 nuclear sites, including power plants.

This poses a grave risk to the security of these areas, especially when the drone pilots were not caught. One of the most talked-about incidents of these incursions was reported at the Palo Verde Nuclear Power Plant. In September 2020, 5 to 6 large-sized drones flew over the Palo Verde nuclear power plant for over eight minutes.

This incident was reported after another drone flew over the same Palo Verde nuclear plant in December 2019. It was stated that these drones were conducting a comprehensive unauthorized and unwanted survey of the facility.

A similar type of incident was observed at the Limerick Nuclear Generating Station located in Pennsylvania. The Perry Nuclear Plant and Diablo Canyon nuclear plants reported 6 and 7 drone flying sightings, respectively, in different locations. These drones flew over nuclear reactors, and others were over nuclear fuel storage sites.

Due to the evolving potential threats posed by the NRC or Nuclear Regulatory Commission, decided to conduct a technical analysis of UAVs for Nuclear Power Plants. The five-stage analysis was conducted to analyze the threat posed by tactics, techniques, and procedures or TTPs of criminals and terrorists. After evaluation, the report stated that the nuclear and other energy-enabled power plants do not have risk-significant vulnerabilities.

The report further added that the drones could not be used to exploit the existing vulnerabilities. These include radiological sabotage (acts endangering public health) and theft of special nuclear material (SNM).

Drones Have Use Cases at Power Plants Too

We cannot deny that drones can become a strategic and cost-effective instrument to maintain security and conduct inspections at power plants. Not only this, we can use drones to conduct a security analysis at establishments related to the power sector.

However, seeing that flying drones near power plants is not free from risks, their utilization for inspections and analysis must be conducted judiciously and by trained pilots. There are several use cases where we can use drones to make the critical infrastructure more secure.

Where inspections are the most prominent benefit of using drones, we can also use them to make the establishment more secure by conducting drone surveillance. They can be used to take pictures or provide a situation report of an affected area, especially when humans are unable to reach the site. Lastly, they can be used for mapping the area around the establishment to find our vulnerable areas that can pose a security threat. 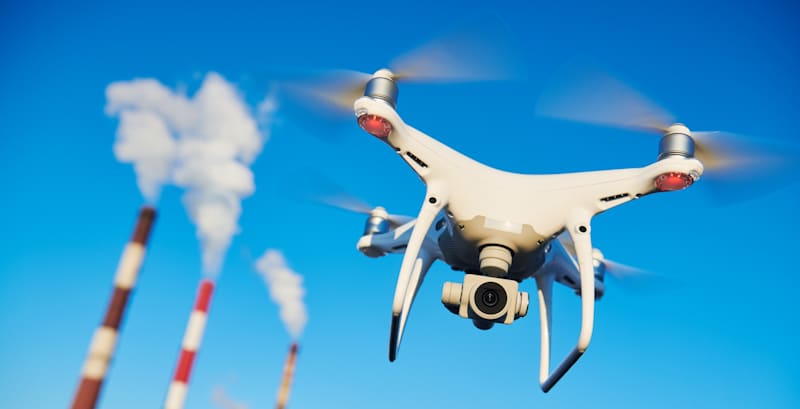 To Sum It Up

Flying a drone near, above, or around the power plants is a serious offense in some states with penalties including fines and jail. Due to the sensitive nature of these areas, drone pilots need to be aware of the state-specific regulations and restrictions.

The laws apply to recreational drones and commercial ones. 10 US states, including Arkansas, Arizona, Louisiana, and Oklahoma, restrict drone access to establishments that compose critical infrastructure. In other states, there are some relaxations. Having said that, no US state has zero-restrictions when it comes to flying drones near sensitive areas.