You must be aware as a new drone pilot of the laws and regulations enforced in areas you intend to fly your drone. This is important because what is not considered an offense in an area could be in another. Ignorance is no excuse to break the law, they say.

The simple answer to the question is yes, but you need to ensure you are not violating any local regulations and laws when you fly your drone. You need to understand things before venturing as a drone pilot, either for recreation or profession.

The Federal Aviation Administration (FAA) And The Airspace

Some of the FAA laws and regulations that guide recreational flying of drones are,

Although, there are plans underway by the FAA to expand the laws and regulations guiding the recreational flying of drones.

If you are flying drones commercially, you need to understand the Federal Aviation Administration rules.

Can You Fly A Drone Over Private Property In California

As stated earlier, the Federal Aviation Administration does not regulate the airspace 400 feet from the ground, but different states and areas have their laws and regulations that control the airspace.

California has enforced laws to regulate its uncontrolled airspace. Though the airspace laws and regulations enforced by the FAA override any laws enforced by any state.

Since 2015, there have been different bills proposed to ban drones' flying over private properties in California. AB-856, signed in 2015, makes a drone pilot who flies his drone in the airspace above another person's land without his consent guilty.

So, if you intend to fly your drone over private property in California, you need to request permission from the property owners, or you could be sued for privacy infringement.

California has its laws, and some laws apply to certain cities, regions, or counties within California.

While California State has its laws that regulate the use of drones, each state has its local laws and regulations.

Can You Fly A Drone Over Private Property In Texas

Texas is another state in the United States of America with laws and regulations guiding its airspace apart from the Federal Aviation Administration federal rules on airspace.

No, you cannot fly a drone over private property in Texas. It is prohibited to use drones to survey public infrastructure and private properties. However, there are some exceptions, only law enforcement officers, a professor researching, and an employee of an oil, gas, or power company.

The laws in Texas on the use of drones are one of the strictest in the US. And you can only use drones for academic, professional, military, municipal authorities, law enforcement research, and some emergency and safety purposes. Land surveyors and realtors can also use drones to market properties.

The laws that regulate the use of drones in Texas are

As mentioned earlier, Texas has the strictest laws regulating the use of drones in the state, so you must learn all the laws on drone flight in Texas and the local laws in the city, town, or county you are in.

What to do When Someone Flies Their Drone Over Your Property

When you fly your drone over the top of someone else's home they have the right to file either a criminal or a civil complaint against you. What they can do will depend upon the laws and regulations regarding recreational drone flying in your community. If the state or local laws say that you aren't permitted to fly a drone in a residential area or over the top of private property, then the person is allowed to file a complaint against you for doing so. When this happens the local law enforcement personnel can fine you and possibly confiscate your drone depending on what laws you've violated.

Even if there aren't specific laws regarding the operation of drones in your local area it's still possible that someone can take some form of action against you. They can file a suit against you that alleges that you:

If someone files a civil lawsuit against you they will need to have physical evidence (e.g. photos, videos) that your drone has flown over the top of their private property. Of course, you'll also have your own evidence since you'll have GPS and flight data verifying the drone's flight path.

How to Stop Drones From Flying Over Your Property

There are a lot of drones that are equipped with cameras today. If a homeowner is able to demonstrate that your drone's camera has invaded their privacy they may have a case against you. There are currently 24 states in which this is currently the case.

When your drone invades another person's privacy you may have a temporary restraining order served against you. This means that you can't fly over the person's residence. They may say that you're trespassing as this is something that applies to both people and objects. For instance, if your neighbor's tree branch extends over the top of your property line you're legally allowed to trim it. In the same way, when a drone flies over the top of a homeowner's property boundaries they can say that it was trespassing. Unfortunately, there is no law regarding how much of the airspace above a person's home is considered to be within the property's boundary. This is why a court will require the person to provide photographic evidence that the drone flew near their home.

Another type of complaint you may have filed against you and your drone is for being a nuisance. Oftentimes someone will file this when the drone disrupts their quiet enjoyment of their property. If you're dealing with someone who's technically savvy they may also try to jam your drone's signal. This means that they're attempting to block the radio signal that's being sent between you and your drone. If this happens, your drone will either return to the location from which it took off or its present home location. Unfortunately, most people don't realize that using a jammer to intentionally interfere with a drone's radio communication is in direct violation of federal law. 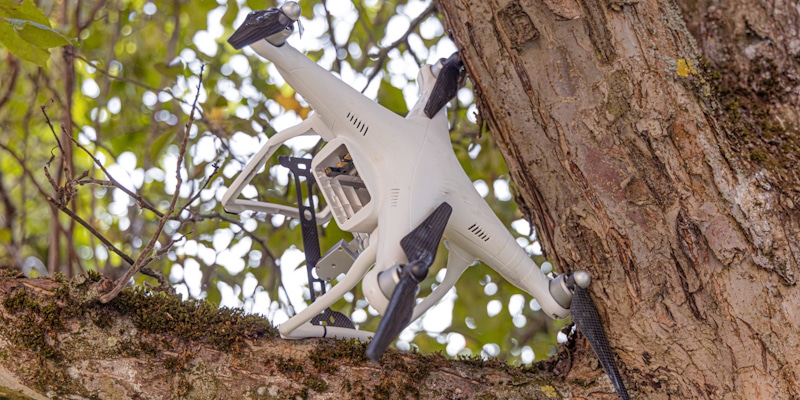 According to the law, property owners can't expect privacy when they're out in the open, even if they're in their own backyard. Therefore there really isn't anything you can do if a drone is there. You'll still need to go through legal channels to prevent the person from flying their drone there in the future. There are a few different types of cases that you can file here. They include:

Private Cause of Action for Private Nuisance

If you've made reasonable requests to your neighbor asking them to fly their drone elsewhere and they haven't responded favorably you may have a court cause of action that's known as a "private nuisance." In this case, the nuisance would be the noise that the drone is making (e.g. the whirring of the drone's engine and blades) and how this is preventing you from having the quiet enjoyment of your property. When you file such a lawsuit most people will stop their annoying actions.

Private Cause of Action for Trespass

It's also possible for you to make a legal case that the drone operator is trespassing on your property. However, it's important to remember that you don't necessarily own all of the air rights that are located above your property. In most states, you will be the owner of the immediate air rights that are surrounding your home's roof. Unfortunately, how high you own isn't an easy or unified answer as this will depend upon the state you're living in. By taking photographs of where the drone is flying you can show the court that the drone is getting dangerously close to your home. In this case, most judges will say that the drone operator is trespassing.

One thing that a lot of people are concerned about with personal drones is that they may have a camera installed on them. These could be very powerful cameras that allow the drone's operator to snoop on you. This is something that many states are concerned about today. Regardless of whether you live in one of these states, if you believe that the drone operator has a camera on their drone you may have a cause of action regarding the invasion of your privacy. When you go to court you can ask for a temporary restraining order directing the drone's operator not to fly near you.

One of the challenges that you'll be faced with when you take a drone's operator to court for either trespassing or being a nuisance is that you probably won't be granted much money. This is because you will find it challenging to prove that you've suffered from a lot of financial harm. Therefore you're better off trying to resolve this issue with the drone operator without involving the court.

While you as a property owner do have the right to control some of the usable space that's located above your land, the FAA still has the right to regulate drone use both below and within navigable airspace. This is why some companies who want to deliver products to their customers via drones are having such a difficult time doing so today: They must pass over people's property and if the state prohibits this, calling it a form of trespassing, they won't be able to do so. The courts are in a difficult spot here because if they authorize the carrier to use the airspace for making deliveries they may need to require the company to compensate the property owner. Ultimately the FAA will allow you to fly your drone above private property.

Understanding the laws and regulations that guide any activity you want to engage in is essential. It is the only way you can act safely and lawfully.

Are you contemplating flying your drone over your neighbor's property, or you want to take some nice pictures of the aerial view? Then make sure to take this information we have provided to heart and stay updated on all drone regulations for your state.