Flying a drone is a lot of fun but you want to make sure that you're not breaking any laws while you're doing so. This is why you want to learn as much as possible about where you are and aren't allowed to fly. For instance, can you fly your drone under a bridge?

There aren't any specific regulations regarding whether you're allowed to fly a drone under a bridge. However, there are some things you should know before doing so. While this is one of the grey areas of the law regarding drones, it's important that you always maintain safe control of your drone. 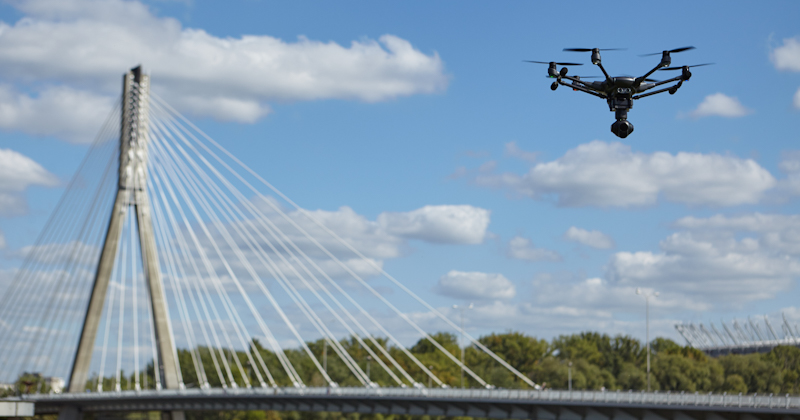 Things to Think About Before Flying a Drone Under a Bridge

As a good pilot, you want to make sure that you always pre-plan your drone's flight. This is especially true when you're flying in an area or a situation that you haven't ever experienced before. For instance, if you plan to fly under a bridge for the first time, there are a few things you should consider such as:

How to Safely Fly Your Drone Under a Bridge

It shouldn't be a problem to fly your drone underneath a small bridge. However, you do need to make sure that you position yourself in such a way that you're able to watch your drone at all times. Before your first flight underneath a bridge, it's also a good idea to practice by flying between some trees or through a goalpost. Once you're ready to make your flight you should:

Losing Your Drone’s Remote Signal Under a Bridge

When you decide you're going to fly your drone under a bridge you need to understand that your remote may lose signal with the drone or your drone will still receive the signal from the remote. In either case, the drone's RTH feature won't be automatic so if you have a connection problem you should toggle the RTH switch off just to be safe.

Another thing that you need to be aware of is that if you're flying your drone under the RTH altitude your drone will continue to rise to this height. However, if your drone is higher than this altitude it will remain at its current height. In either case, the drone will fly back to where it took off and hover there until its battery reaches the critical state at which time it will then proceed to land. Depending on your drone, you may be able to take control of it. For instance, with the Phantom 3, you can switch to the Atti mode when you're within range then switch back to GPS.

Losing Connection with Your Drone

Understanding that your drone may lose connection with you while flying underneath a bridge is important. When this happens, due to certain types of connection loss and how long they last, your drone will typically return home. It is a good idea to take a moment to think about these scenarios so that you're prepared for them when they happen.

One thing that may happen is that your app may lose connection or shut down (e.g. you have a faulty USB cord, there's a software issue, the app or mobile device freezes). When this happens your drone will continue to execute its mission and then return to home once its battery life reaches 25%.

It's also possible that you lose connection with your drone and the remote controller. This typically happens when your drone exceeds the distance that your remote controller's signal is able to maintain or if there's any magnetic interference from surrounding areas (e.g. the bridge).

Additionally, you may lose connection if the drone's GPS signal gets lost. When this happens your drone will usually land wherever it is because without a GPS signal your drone can't determine its location.

Flying Around the Golden Gate Bridge

Some people may argue that this sign is a bit vague because it doesn't tell you what the word "near" means. For instance, are you able to fly your drone over or under the bridge but not through it? Can you fly your drone past the bridge to get a panning shot? Do you have to stay 5 miles away from the bridge? Fortunately, there are apps that will let you check for no-fly zones but you still may wonder exactly what's legal here.

The Golden Gate National Recreation Area governs the area around the Golden Gate Bridge. They are managed by the National Park Service. In August 2014 they were the ones who were responsible for issuing the policy memorandum that prevents people from launching, landing, or operating drones under 36 CFR 1.5. What this regulation does is it provides the National Park Service with the authority it needs to be able to impose public use limits on parks. This includes things like the park's hours of operation, whether you're allowed to walk off of the path, and, in this case, the usage of drones.

Even within these regulations, you will find some loopholes and exceptions. For instance, the National Park Service has been known to make exceptions for things like conducting a scientific study, fire operations, law enforcement, and search and rescue operations.

Upon further investigation regarding where you're allowed to fly your drone in and around the Golden Gate Bridge, you will find that there are actually two areas that will allow you to do so here. These areas include the land that's just north of Muir Beach Overlook and the area that's located in Fort Funston. While both of these areas are still considered National Park territory, they aren't located anywhere near the Golden Gate Bridge.

Another thing that the sign fails to mention is that there are penalties if you break the rules. This means that if they catch you and can prove that you knowingly and willfully violated the rule you will be fined. You could also be imprisoned for a period of up to three months.

So while you may want to fly your drone under a bridge you do need to be careful when you choose which bridge you will fly under. You'll want to be on the lookout for any warning signs before you launch your drone. This way you won't pay a hefty fine or serve time in prison for simply having a little fun.

Today one of the more common reasons for flying a drone under a bridge is to inspect the bridge. This is actually quite beneficial in comparison to conventional inspection methods. These inspections can be done in a way that's non-intrusive, cost-effective, and safe. When inspectors evaluate the high-quality footage the drone's powerful cameras were able to capture they're able to quickly and efficiently conduct a thorough visual inspection of any area of a bridge.

Some of the other great reasons why drones are being used for bridge inspections today include:

While drones still can't be used to fully replace humans who work on these bridges they're a powerful tool that many inspectors have begun using to visually inspect bridges today. Doing so allows for more comprehensive and efficient bridge inspections that cost a lot less money too.

Drones have come a long way over the years. This hasn't only added to their popularity, it's also added to the fact that they're being used in many industries and for many jobs like bridge inspection work. While this is true, you should know that there aren't any specific regulations in regard to whether or not you're legally allowed to fly your drone underneath a bridge. If you do decide that you want to fly your drone under a bridge, it is a good idea to know what to do if you were to lose your drone's signal while doing so.