Indeed it is cool to steer the car with just one hand on the wheel and the other on the lever. But driving a car with one hand and navigating a drone with your dominant hand is different. In this article, we will explore the nuances of flying a drone with one hand. While understanding the possibility of this daredevil act, we will also find out how to do so.

Yes, you can fly a drone with one hand. But, it is a bit more complex to fly it with one hand. Either you can learn to operate with one hand or use a one-hand joystick like the FT Aviator. Lastly, there are gesture-control systems developed for a seamless and new age of drone flying.

Really, Can I Operate a Two-Handed Joystick with One Hand?

When you think about it, operating a drone with one hand means controlling the pitch, direction (left/right), rotation (yaw), and speed/throttle with one hand. While these are the simple functions mostly found in Consumer Drones, other advanced agriculture, commercial, or enterprise drones have multi-use controllers, which are not easy to control even with two hands.

We gathered insights from our drone community and searched the web to find awesome people who have achieved this feat of flying a drone with one hand. Well, there wasn't much that we could scoop out, but there is one guy, Oleg S. Dudrin. Unfortunately, Oleg only has one hand, and even then, he is a master at Drone flying.

Don't believe us? Watch this video, which demonstrates his mad skills of one-hand joystick control. Oleg's journey was not comfortable. While knowing more about him, we found a picture that shows the top skin of his fingers are all worn out from regular stabbing to fly, steer, and rotate the drone.

But How Does Oleg Operate the Drone?

Oleg uses a harness to hang the controller around his neck and resting it on his stomach with the antennas facing towards his right. He controls the stick with his left hand. We can see in the video that Oleg uses his index finger and the pinky finger to control both the sticks.

While the two fingers in the middle are used to control the trim or the power supply to the drone. The same setup can be used by any other drone pilot who wishes to control the drone with one hand. Where Oled had to learn it because he didn't have any other option, those with two hands are fortunate enough to practice the skill with individual hands.

Oleg received a ton of accolades for his unique skill set, with some people saying that they can't match the smooth-riding ability with the one-hand master even when they are flying with two hands.

So, to answer your question, flying a two-handed joystick drone with one hand is possible. However, because we live in advanced age and want to make the best of the limited resources that we have, several organizations have developed joysticks that can connect to several major drones and allow the user to fly them with one hand.

In our search, we found another guy who is encouraging people with disabilities to cope up with drone flying. He has a YouTube Channel, Inspired Flyers, to promote and share his way to use drone flying.

In one of the videos, the guy showed us another way to fly a drone with one hand. Although the process he shared is a bit slow, it makes one-hand drone flying a possibility. He uses the basic Area Navigation (RNAV) route mapping to suggest making waypoints.

As a replacement to the efforts put in by the drone pilots to control an UAV with one hand, we have come to an era where technology has built a joystick promoting one-hand control. In other words, peripherals associated with the right stick, left stick, trim control, among others, are configured and installed into a single joystick, almost resembling the one we can see in a chopper. 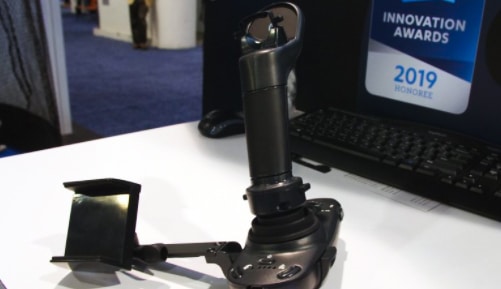 The Highlight of Consumer Electronics Show 2019

The search for the right method to fly a drone with one had led us to go through the highlights of Consumer Electronics Show 2019, bringing us to the unveiling of Fluidity FT Aviator. One of the great innovations as yet in the drone industry, the FT Aviator connects to the majority of drones offered by DJI.

The FT Aviator is built by an astronaut, and it has the fluidity plus flexibility required to pilot a drone in any way possible with one hand. The main part of the drone is a joystick. An omnidirectional joystick moves the drone in all directions, and it even rotates to make the drone do the same in the clockwise and anti-clockwise directions.

Not to promote the joystick so that we may sound sale-like, but we are only exploring the number of tasks one joystick can do when you are operating it with a single hand.

Knuckle and Pulsit are two different controllers to operate the drone. Pulsit the drone control experience to the next level by letting the pilot the machine with gesture control. Basically, the drone will move where the hand goes as it imitates the hand's gestures.

Coming to Knuckle controller, specifically, the Knuckle-5, which has been recently launched and promotes one-hand drone control. The Knuckle-5 is a controller that has an 8-axis control system provided by two trackballs and an inertial measurement unit (IMU) system. In simple words, the trackballs combined with the IMU helps to navigate the drone in every direction the pilot wants.

The motive of these new-age controllers is to enable a person to pilot the drone with a single hand. Looking at the pace of these advancements, it would be safe to say that we can expect some type of no-hand or mind-control drone controllers. Don't you think?

To understand the benefits of the system, we need to explore the limitations of a two-handed system first. The first and foremost is that by using a two-handed joystick, both your hands are tied up in controlling the drone, and it leaves minimal scope to do other things.

So, a one-hand control system frees the non-dominant hand to work on anything else that you want. At present, this one-hand drone control system does not apply to all types of drones. The Fluidity FT Aviator that we have seen is compatible with the DJI drones, while the other controllers we have seen also have limited potential to connect.

The core principle of the hand-controlled drone (Pulsit) is telemetry. An accelerometer is attached to the hand control peripheral, and a microcontroller attached to the drone receives the signals sent from the hand. One-hand drone operation is even more beneficial in the drone racing, commercial, and entertainment industry. It can cut down a two-man operation to a one-man army.

Going forward, it is possible to attach other non-flying related functional peripherals to the same control system and help users enhance their scope of operation. The founder of Fluidity and curator of FT Aviator believes that their one-hand joystick control can be used in a wide range of applications. Furthermore, it won't be necessary to create a new controller for every application.

By taking the one-hand joystick control as the standard, innovations can be made to the core system, and other aspects can be built around it.

Tips to Fly a Drone with One Hand Successfully

Drone flying is a mix of art and technique. While some people are naturally inclined to fly a drone with expertise, others can take time to grow into it. Here are a few things to remember by when you are flying a drone or learning to fly one. 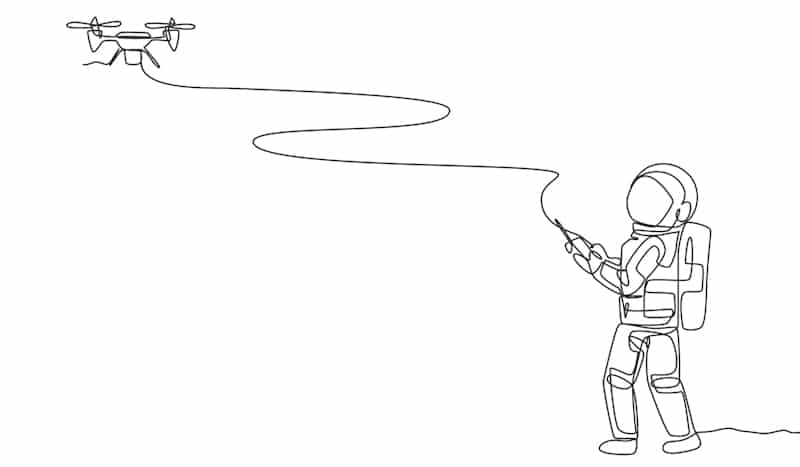 It is clear that flying a drone with one hand is possible and can turn out to be a lot of fun once you get the hang of it. Think about the possibilities of such a setting wherein you can use the non-flying hand for any other purpose. Plus, this allows the people who face a lack of muscular control or only have one hand, become a drone pilot and become a part of the community.