Less than a decade ago, drones were just used for law enforcement and news broadcasting. Currently, they have many commercial applications, especially for mini drones, such as videography and light shows. Drones can even be used as toys, some look like toys but don't work as such. When you look around, you might see someone flying a mini drone through a smartphone but is a smartphone the only controlling tool?

If you are asking whether you can fly a drone without a smartphone or not, the answer is as long as there's a dedicated controller, you definitely can fly a drone. Since a drone is an unmanned flying object, the mechanisms installed inside will require a tool to control it remotely.

The basic aspects you can manipulate in a drone are the directions and speed. To fully maneuver it, you need a 'first-person view' or FPV screen. Most of the savvy drone users probably have plenty of buttons in their controllers due to the many features added.

However, manufacturers target more the novice market, and the most convenient way to substitute a physical controller is by simply designing an app for a smartphone. Most novice customers, who have drones for taking pictures and videos only, feel that a corresponding smartphone app is enough.

With the inclusion of the FPV screen and GPS capabilities, it seems that a smartphone can be comparable to a mini-computer. But, overall, as long as there is a remote controller, either a smartphone or a dedicated transmitter, then you can fly a drone however you want it.

Best Mini Drones That Do Not Require A Smartphone

If you are looking for a mini drone that needs no smartphone, here is a list of some of the best in the market today:

This Typhoon H made by Yuneec is a hexacopter, which means that there are 6 rotors equipped. One of the product's perks is the "Intel RealSense Technology" which is used to detect obstacles and self-navigate around them. It is partnered with "sonar collision prevention" wherein the drone has an automatic evasion of an incoming drone or flying object through.

To manipulate its flight, an ST16 transmitter will act as its remote controller. There is a 7-inch LCD located in the middle of the controller which can display 4K resolution. Therefore, you typically zoom in on the 360-degrees CGO3+ camera how many times and you still get a quality view.

The 3-axis gimbal stabilization ensures that this drone can capture great shots from a target in motion, while the 5-rotor failsafe landing capability makes it safe to fly at longer distances without a worry of a catastrophic fall in case of collision.

The drone is equipped with 8 smart flight modes. Typhoon H can fly away at a range of 1600 meters or 1 mile and has an optimum flight duration of 25 minutes.

As one of the most popular drones that DJI has ever released, the Phantom 4 Pro proves to be one of the best user-friendly types. It is equipped with all the features in the Phantom series plus more. Included in this product is "FlightAutonomy", which is a network using high-resolution stereo vision sensors for multi-directional obstacle sensing and avoidance.

The 1-inch thick, 20-megapixel camera is equipped with a CMOS sensor and the captured footage can be processed at frame rates of 60 fps in H.265 4K or 30 fps in H.265 4K with a bit-rate of 100 Mbps. The 3-axis gimbal aids the drone's feature to recognize subjects and acquire complex shots with ease.

To view what the camera has been captured, the remote controller has a 5.5in 1080p screen display. For fluid streaming, the Lightbridge HD video transmission system operates at a frequency of 5.8 GHz.

The flight range can reach as far as 7000 meters and can stay in flight for about 30 minutes. For easy piloting, there is a feature called "TapFlt Free". You won't be worrying about its durability for the body is lightweight and constructed from magnesium alloy and titanium alloy.

UPair One is a great drone if ever you require a budget-friendly device. This is ideal for entry-level photographers. With the huge 7-inch LED screen display mounted on the remote controller, you can enjoy fluent 4K resolution video footage transmitted at 5.8 GHz frequency.

The 9-megapixel, 2.7K camera is equipped with Panasonic's CMOS image sensor and a 110-degree adjustable lens. With a 2-axis gimbal, you will worry less about taking shots of a moving subject. You can make the most of your drone with its intelligent, high-capacity battery.

The flight range is about 1000 meters and the operating duration is about 20 minutes. In case you lost sight of your drone, don't worry because it has a smart return capability through "GPS Auto Return". The "Headless Mode" lets you attune the direction of the drone towards you when flying.

If you prefer a simple drone loaded with the only necessary features, Hubsan H109S might be a great fit. It comes with a solid full HD camera and a touchscreen display on the dedicated remote controller. For shot stability, there is a 1-axis gimbal and an "altitude hold" feature.

The drone can fly at 1000 meters at most and can stay in flight for about 25 minutes. In case it might be misplaced, it is capable of automatically returning home through the help of GPS technology. Additionally, for orienting the drone's direction, you have the "Headless Mode".

The FPV video transmission is operating at 5.8 GHz and the remote controlling's frequency is at 2.4 GHz. This means that the communication between the controller and the drone is very fast. Overall, it's a decent drone to have for casual users. 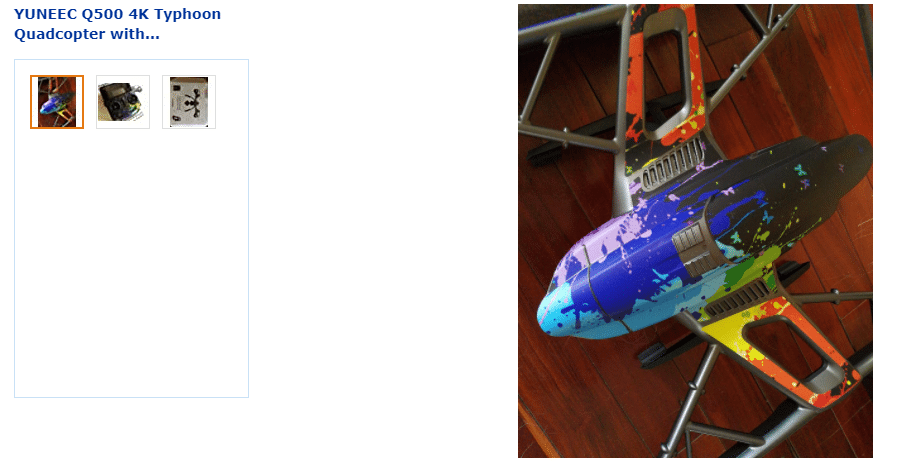 This is another entry for Yuneec. The Q500 is generally designed for aerial photography and videography. The CGO2-GB set-up includes a 12-megapixel camera that can deliver footage at 1080p resolution in 60 fps frame rate.

To take still photos, a 3-axis brushless gimbal will provide stability. To aid you in maneuvering, the LCD touchscreen on its huge ST10 remote controller is sizeable enough for great quality FPV footage. With a 10-channel remote control transmission at 2.4 GHz and a video downlink operating at 5.8 GHz, you can expect a smooth transition of commands.

The product includes plenty of accessories such as multiple chargers, an extra rotor set, and a sunshade. The drawback can be its limited range, around 400 meters. The flight time is decent though, reaching up to 25 minutes.

This is the second Hubsan product on the list. For very casual users, this can be a perfect stepping stone for more exposure to drone usage. The H501S drone is equipped with a 1080p-resolution HD camera and an "altitude hold" feature.

On its 4.3-inch LCD screen on the controller, the 5.8 GHz video transmission allows you to view footage at 480p resolution. Its slim design makes it lightweight and easier to take off together with the 6-axis gyro for flight control.

It is also equipped with auto-return features such as GPS tracking and "Headless Mode". Its flight time is 20 minutes top but unfortunately, and its range is 300 meters only.

Even though the market is filled with smartphone-operated drones, there are still available out there that don't need one. Furthermore, they are of great quality with multiple capabilities, just as stated in the list above. Whatever purpose you have, there is a mini drone suitable for you.

A: A drone is defined as any unmanned vehicle but in the context used nowadays, it refers to unmanned aircraft that is fully controllable. A "mini" drone has typically the same scale as an RC toy helicopter. Mini drones are widely used for capturing pictures and video recording.

Q: Is a license required to fly a drone?

A: The operation of drones can vary depending on your location. For professionals, their license to practice their profession may serve as a requirement. It will be better to refer to city ordinances and state laws for more clarifications.