The drone business is fast-moving and displays no sign of stopping; with thousands of professional drone pilots, the business is booming and expanding in terms of both diversity and volume. With the expansion of the job market, many people are considering different types of drone jobs to engage in.

The demand for skilled drone pilots is on the rise; several businesses rely on drones for job completion every year. If you have a drone, there is no better time to utilize the drone and make money. 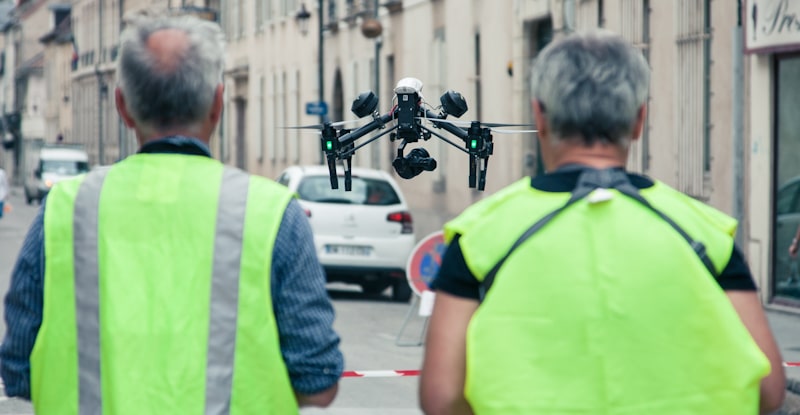 Drone flight operations are the responsibility of entry-level drone pilots; they are also known as unmanned aerial vehicle flight coordinators. Flying private or commercial drones, mapping landscapes, and maintaining related technologies are some of their responsibilities.

There are several jobs an entry-level drone pilot can engage in, such as agriculture, transportation, journalism, videography, education, military, construction, public safety, and real estate. Although entry-level drone pilots sometimes fly drones solo, they usually work alongside a senior pilot to gain experience and develop their skills.

Becoming an entry-level drone pilot requires you to have a Remote Pilot certification, requiring you to pass an important test exam on the use and operation of aircraft. Emergency procedures, aircraft performance, pre-flight inspection, and weather effects are important to understand.

Drone pilots have made it possible for potential buyers to get a comprehensive view of any property they are considering purchasing using videos, 3D maps, and aerial stills created from the data captured by drones. Drone piloting for real estate marketing demands both flying and video and photography expertise.

As an entry-level drone pilot, you must be able to handle post-production for raw media and transform it into finished videos and photos for clients on a typical real estate job. This procedure involves showing up at the location, using your drone to get good images and videos, and then going home to work on the footage until you get usable videos and images.

Drones have been a frequent tool in journalism in recent years, with overhead photos acquired by drones assisting us in understanding how a flood has affected an area, documenting a crowd's size, or recording the scale of a wildfire. Drones are commonly utilized in media as an additional vantage point for telling stories, as video footage and aerial stills may lend an added element of drama.

The skill sets needed to use drones in journalism differ depending on the use case. Working as a documentarian may necessitate a high level of knowledge in photography and videography, but breaking news coverage may not necessitate such a high level of expertise. Your flying skills will almost certainly need to be top-notch in any scenario involving journalism.

Drones are being used in classrooms across the United States, from elementary to middle to high schools and community and four-year institutions. Working with drones in education could imply that you are a teacher that introduces the use of drones in classroom activities in order to make students more interested in STEM subjects.

It can also refer to teaching and instructing people to fly and operate drones. It may also mean starting a club in a school to help students become more interested in the science behind drones and flying. If you want to use drones in education, you should consider whether you need a Remote Pilot Certification required for all commercial operations in the U.S.

The demand for skilled and experienced drone pilots is on the rise. Every year, more and more businesses rely on drone pilots and their drones to complete jobs that would otherwise be prohibitively expensive or unattainable.

In various industries, there are numerous opportunities to create a drone career. Certification is the first step in beginning a drone business; before operating a drone, the Federal Aviation Administration requires all drone pilots to verify their proficiency by passing a certification test. Anyone paid to operate a drone is considered a commercial drone pilot.

Drone photography and filmmaking are among the most appealing industries for drone pilots, with the largest market and the greatest number of pilots offering the service. There are probably a dozen or more methods to make money with drone photography. You can take images and sell them online, cover events, provide print advertising service, or capture aerial footage for real estate agents.

It is a simple field to break into, owing to the many experienced photographers currently in the field. Drone filming is a lucrative career ideal for people who have already worked in the film industry. Drone-captured aerial footage has almost become a staple aspect of modern filmmaking.

Using drones to create 3D maps and models is a task with much potential. A 3D terrain model can help any business that demands significant construction, such as urban planning, civil engineering, and mining. Drones can be used to create three-dimensional models in two ways.

A good, detailed model can assist these companies in determining how much excavation is required, the length and slope of the road that must be constructed, and the mitigation measures that must be implemented in the event of identified geological hazards.

Power lines deteriorate over time and require routine maintenance to keep them in good working order. The difficulty comes from inspecting miles of electricity cables merely to find damaged pieces, which can be extremely short. Drones are more efficient in fixing this problem as they can easily fly along power lines and traverse several miles on a single battery cycle.

Work that would ordinarily take a few weeks can be completed in hours by using a drone equipped with a thermal camera to survey electricity wires for damage. It is safer and easier logistically; you will need a group of people like a drone operator, a vehicle driver, and a visual observer.

How To Get Drone Pilot Jobs

Anyone who uses a drone to make money is a commercial drone pilot. To get drone pilot jobs, you first need to obtain an FAA tracking number by submitting an IACRA to the FAA. Next, you must pass the FAA Unmanned Aircraft Knowledge test and complete an online application for a remote pilot certificate.

After getting the certification, you should register your drone with the FAA if it meets the requirements for registering a drone. Then, to get a job, you should explore different career opportunities. You can work as a freelancer or directly for a company. As a freelancer, some companies might want to hire you on a contract basis.

What Jobs Can You Get With A Drone License?

Once you have a drone license and a registered drone, getting a drone job is a piece of cake. Several industries require drones; the most common ones are mining, education, real estate, journalism, energy, transportation, construction, aggregates, public safety, insurance, telecommunication, filmmaking, and agriculture.

In the drone sector, there are numerous job prospects. However, obtaining a drone pilot's license is only the beginning. You must perfect your skillset to make a living out of the profession of drone operating. You must be a UAV association member to keep your drone license active.

Currently, becoming a professional drone pilot will be a genuine career option. A proficient drone pilot has many opportunities to get well-paying prospects as more sectors and corporations recognize the utility of drones. Drone pilots are now employed by various organizations, including private corporations, municipal governments, and advertisers.