There are different types of drone landing pads that you can get, but the size of your drone plays an important role in the type of drone pads you need. After reading this blog post, we hope you understand the importance of a drone landing pad.

Do You Need A Drone Landing Pad?

Yes, you do need a drone landing pad. Nobody wants their recently purchased drone to start developing issues after a few weeks of flying it. Different things can cause a drone to malfunction, like dust, debris, grass, and weeds. These things can cause severe damage to your drone when you consistently land your drone on the ground.

Drone landing pads protect your drone's gimbal from damages because when you take off in a bushy area without a landing pad, grasses and weeds can tangle with the drone's gimbal and cause critical damage to it.

When you land or take off your drone without a landing pad in a rocky or dusty area, the rotor wash of the drone can create a cloud of dust and debris which can cause severe damage to the drone.

A drone landing pad also provides a safe place for the drone to land in case of an emergency. For example, if your drone loses signal or encounters a problem during flight, you can use the return to home button on the drone, and it will come back to land on the landing pad.

What Are The Best Drone Landing Pads You Can Buy?

The SYMIK LP500E Drone Landing Pad is another two-sided waterproof landing pad that can accommodate most DJI drones and Phantom series. This landing pad is also foldable and comes with a storage pouch that makes it easier to transport.

The SYMIK LP500E Drone Landing Pad is also lightweight, so it should not be used in windy situations. It comes in only two colors; blue and red.

The VCUTECH Drone Landing Pad is a double-sided waterproof landing pad that is compatible with the DJI Mavic series, DJI Mini 2, RC drones, Antel robotics, Phantom series, and FPV drone. This landing pad is foldable and can be carried anywhere; it also has a size of 20 inches. The pad comes in two colors; orange and dark grey, and it is also lightweight and compact.

The VCUTECH Drone Landing Pad is stain resistant resistant, so you can use it in any environment without being worried about stains. It is also made of high quality and is wind resistant, so you can still use the landing pad in windy weather. VCUTECH Drone Landing Pad also helps your drone find its home position easily while protecting it from dirt, stone, dust, and other debris that can damage your drone.

Hoodman HDLP drone landing pad is one of the best landing pads for your DJI Matrice Inspire and smaller RC quadcopters. This landing pad will help in keeping the lens of your drone clean during take-off and landing. It also protects the drone's rotors from pebble strikes and tall grasses.

If you are taking off or landing from a beach, this landing pad will protect your drone from sand that can affect the drone's lens and gimbal. Hoodman HDLP drone landing pad is also wind resistant and can withstand any weather condition.

This landing pad is made of rust-proof components, making it easy to clean. Once you have a wet cloth, cleaning it is a piece of cake. It also comes with a bag you can fold it in to carry it easily.

The high-quality PU material that the landing pad is made of makes it sunproof. The foldable quality of the PGYTECH drone landing pad makes it easy to carry in any bag or carry sack that it comes with.

Things To Consider Before Purchasing A Drone Landing Pad 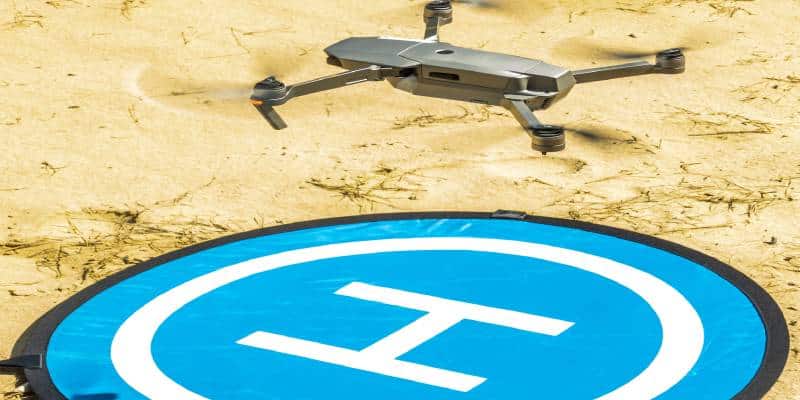 Before you purchase a drone landing pad, there are some things you need to consider. It is vital because it determines the type of landing pad you can buy.

Size And Design Of Your Drone

The size of your drone plays a significant role in the type of landing pad you should buy. It would be very disappointing if you bought a landing pad that is too small for your drone. Hence you have to make sure the landing pad you want to buy is big enough to accommodate your drone, and there should be some extra space at the sides.

Features Of The Landing Pad

With a landing pad, it is easier to land a drone. However, you cannot walk into a store and buy any landing pad you think is good. You must have taken some preliminary steps first, like knowing the best quality that would be perfect for the environment you are in and knowing the best-sized pad for your drone.