Drones are among the top and fastest-selling pieces of technology in the industry; in the hands of expert pilots, they can record fantastic videos and be used for various entertainment purposes. However, most people do not understand the logic and physics behind the operation of drones.

Rotors are responsible for the vertical movement of a drone. Drones use the rotors—a propeller attached to a motor to hover. The drone's rotors function as wings. They generate lift by spinning quickly, pulling the air downward, and propelling the quadcopter drone into the air.

Understanding the physics behind a drone's operation will help you fly them better and more accurately. There is a lot to know about the technology of drones and what makes them fly; with this knowledge, you will have a clear understanding of drones.

How Does Drone Technology Work?

A drone is also referred to as an unmanned aircraft. A drone is a flying device that an operator can fly independently or operate remotely using flight plans (controlled by software) in its embedded systems, which work with onboard sensors and a global positioning system (GPS).

UAV technology encompasses everything from the drone's aerodynamics to the materials used in its construction, as well as the circuit boards, chipsets, and software that serve as the drone's brains. UAV drones are outfitted with innovative technology such as infrared cameras, GPS, and lasers.

Collision avoidance technologies are now standard on the latest high-tech drones. These scan the environment with obstacle detection sensors, then convert the images into 3D models using software algorithms and SLAM technology, allowing the drone to identify and avoid obstacles.

To sense and avoid, these systems combine one or more of the following sensors; ultrasonic, infrared, time of flight, vision sensor, lidar, and monocular vision. A drone's ability to sense objects and fly around obstacles in front and backward is because of the Advanced Pilot Assistance System or APAS.

The UAV drone's smooth flight characteristics are due to gyro stabilization technology. The gyroscope reacts instantaneously to forces acting against the drone, allowing it to fly or hover with ease. The central flight controller relies on the gyroscope for navigational information. Using one or more accelerometers, the IMU detects the acceleration rate.

The drone technology that propels the UAV into the air and allows it to fly in any direction or hover is the propulsion system. The motors and propellers on a drone work in pairs, with two motors turning clockwise and two motors rotating counterclockwise.

This is a wireless communication device that operates at a frequency of 2.4 GHz. In an open, unobstructed region, it expands the range of communication between the smartphone or tablet and the drone. Transmission distances of up to 700 meters are possible; each range extender's MAC address and network name are unique. 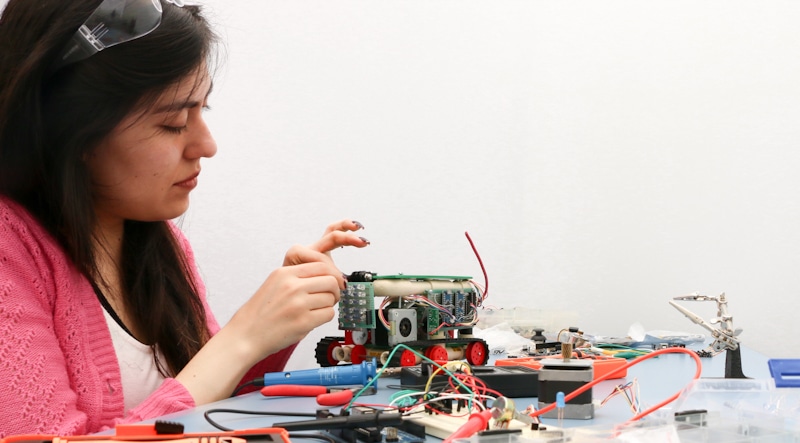 How Does Flying A Drone Work?

A transmitter or a remote controller often controls drones. This useful device resembles gaming or toy remote controllers with buttons and joysticks that fulfill numerous duties. Professional models can be extremely daunting, and it may take some time for a user to utilize all their features fully.

The pilot operates the left and right sticks with their thumbs, regardless of how complicated the drone is, and most models have a similar set of features and capabilities. The drone operator can move the drone up, down, left, right, and diagonally by pushing or pulling the sticks.

After understanding the workings of your drone and basic controls, you have to implement them by flying the drone. Below is a step-by-step guide that you can follow for a fun and safe drone flying experience. To fly a drone, you first need to secure an accessible area for flying.

If you already own a drone or are considering acquiring one, you presumably have a location to practice. It can be any open space but must be safe and free of obstacles, so the drone does not crash into a tree, wall, or other people. Also, be sure that the location allows for the use of drones to avoid breaking any laws.

After the transmitter has been connected to the drone, you can start practicing takeoffs and landing and fully explore the sky with your drone. However, before flying a drone, remember to charge its batteries fully and register the drone if its weight is above 250 grams.

A drone operates in a similar pattern to an airplane. Like all other flying machines, there are four forces acting on drones. Various forces act on a drone as it flies through the air; the resultant force determines its movement. The four major forces that act on a drone are weight, thrust, drag, and lift.

It is, nevertheless, natural to the rotor plane for drone dynamics. The thrust is entirely vertical while hovering. The drone will tilt forward or backward if the push is angled. This force is necessary for the drone to move in the desired direction at the same speed. Lift is the vertical force acting on the drone.

Pressure gradients across the drone cause this force (in the vertical direction). As a result, the lift force is determined by the speed, size, and shape of the propeller blade. Drag is the force that acts on the drone in the opposite direction of motion owing to air resistance. This could be due to air viscosity and pressure differences.

Drones are one of the most fun and exciting devices to operate; children and adults love them. However, as a drone operator, it is necessary to understand the physics behind the operation of drones. This way, you fully know a drone and know how to operate it correctly.