Drones are one of the most fun and exciting devices to use. However, with the entertaining use and safety, drones can also be used to spy on people, especially at night. Some frequently use drones to spy on others; therefore, you must know how to recognize a drone at night.

Some things to look out for when trying to spot a drone at night are the taillights, the propeller's sound, and the navigation lights. To spot a drone, you can also use drone detector sensors, infrared motion detection cameras, microwave motion sensors, acoustic sensors, and radar detectors.

Flying a drone at night can be exciting for the pilot; however, some suspicions about his intent could also arise. You will probably be worried if you have found drones wandering around your properties, so you need to know how to spot a drone at night.

Surveillance How To Spot A Drone At Night

Drones have evolved from photography and filmmaking to surveillance and spying, and the technology behind them has advanced to the point where they may be as little as a human hand or as large as a car. However, drones are not very visible at night due to the lack of light, but they have visible light.

Someone being watched by a drone would not see the drone but only see the bright light coming from it as it hovered over them. This is why it is crucial to know how to recognize a drone at night, since if you do not, they may be able to spy on you without your knowledge.

Since most camera drones possess dazzling lights better quality filming, the easiest and most popular approach to spot a drone at night is to seek its light. Basic drones have a single light that is constantly on. However, advanced drones have two lights, one of which blinks, and the other is always on.

Drones do not usually come with poor lighting. They are equipped with powerful lights that allow you to see them as they approach; drones emit a wide range of light hues. It is most likely a hobbyist drone if you observe two green and red lights in the sky. However, if you can hardly see these lights, they are probably too far to spy on you.

Some drones, such as the Parrot drones, start making sounds right away. This makes it easier to notice a drone at night as you can hear them approaching before you see them. Although this method is not very dependable because sound travels further than light, it may be difficult to hear if there are other noises surrounding you.

If you try to follow the sound's path and figure out where it is coming from, you will be able to locate a drone quite quickly. This strategy works well when there are few other distractions. Because drones always produce radio signals, following their radio frequencies is another and best approach to identify them at night.

The drone's live feed is normally broadcast on a far-end radio frequency, which requires special equipment to follow. The drone's radio waves will begin at a low frequency and gradually increase in range, eventually fading when the drone comes to a stop. If you want to use this method to monitor a drone, you must constantly move and try different angles.

An infrared motion detector is another way to spot a drone at night; although this strategy is not often used, it has the potential to be quite effective. Anyone who utilizes a drone for spying will certainly have infrared illuminators, which are the only source of light visible to infrared detectors. If a real-time video stream is unavailable, infrared illuminators are usually used instead. 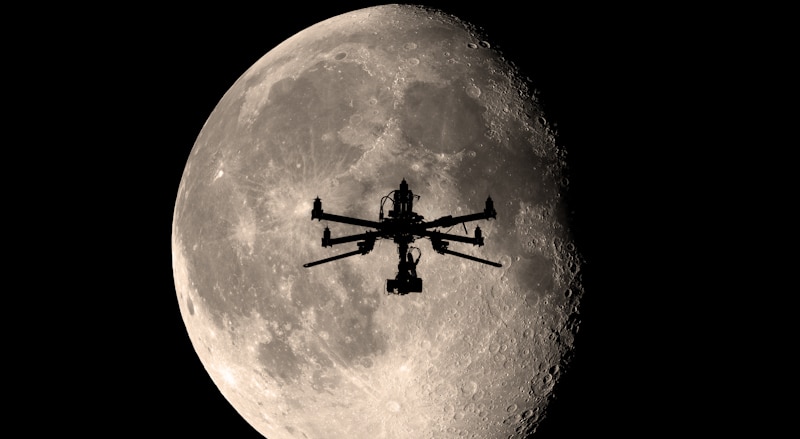 Police Drones At Night In The Sky

It can be difficult to tell what a police drone looks like at night in today's modern police state, where police drones have become increasingly common. Police drones cannot see well at night, so they have to rely on anti-collision lights, night vision cameras, and the standard LED white color, which helps the drone see better in low-light situations.

Because police do not want people to notice police drones flying around during the day, nighttime operations often differ from daytime operations. During night operations, police drones usually fly very low to the ground. The use of police drones at night might sound fictional, but there are cases where these drones have helped police rescue people and arrest criminals.

However, sometimes in emergency cases, police drones are required to acquire a bird's eye perspective for police personnel on the ground to figure out what is going on and how they can best assist. Although police drones are not as spectacular as other police technology, they save lives and safeguard civil liberties across the United States one day at a time.

During the night, police drones equipped with thermal imaging or infrared technology may be flying. However, they are not spying on residents unless there is cause to believe anything criminal is going on. If there is no need for police to use any special night equipment to fly a police drone, they will not use any night equipment.

Police drones using night vision cameras can conduct night missions, allowing the pilot on the ground to observe evening events from above safely. Another benefit of night vision cameras is that they can see in low light circumstances, which regular cameras cannot. This indicates that will be the period when their presence would make a substantial difference.

Why Are There Drones Flying Around At Night?

Drones are becoming a very common sight, even at night, thanks to the Federal Aviation Administration's loosening drone ownership and flying laws. Drones are used in various businesses, including surveying, filmmaking, photography, mapping, and recreation. Thanks to the new FAA regulations, drones can now fly at night.

This law might get you worried about whether drones are spying on you or have been ordered to carry out other nefarious acts because they are hard to notice. If you are in the United States and see a drone in your neighborhood, a filmmaker is most likely looking for some night footage.

Law enforcement agents are also using drones for airborne surveillance, which can take place at any time of day or night. The government also uses drones to monitor citizens as they exercise their constitutional rights, which might occur during the day or at night.

Although the FAA has authorized the operation of drones at night, there are some requirements the drone must have before it can be legal for night flying. The operator of any drone flying at night must be licensed and stay up to date with recurrent training and testing. The drone must also have a standard identification that displays its control center, location, and identification.

While it is a wonderful idea to use drones for various objectives, you should also protect your privacy. Remember that if a drone was spying on you, it could have collected photographs of your home that could be used against you. It is always preferable to be safe rather than sorry. So keep in mind that intercepting radio signals sent by a drone is one of the most effective ways to spot one; stay safe by using jammers or detectors if necessary.

Keep reading: What Does a Police Drone Look Like at Night? A Complete Guide