Everyone with a nerf gun has wanted to get more firepower from their gun one time or the other. Most Nerf guns can blast longer, but Nerf always dials it back for safety reasons. However, with the right Nerf gun mod kit, you can make changes to your nerf gun and increase its power.

Nerf’s Modulus series is built for simple part switching changes, but mod enthusiasts do not end there. The pleasure and attraction of customizing your own Nerf guns include sanding and adding non-Nerf parts to your Nerf gun.

You can modify any Nerf blaster, although not all Nerf guns are manufactured the same. Some models are designed to be swappable, making them an excellent place to start. Other Nerf blasters, on the other hand, have a blank slate attraction; below are some best nerf gun mod kits.

The Skywin Modification Nerf Kit is durable; it changes the appearance of the blaster to that of an M4 for a sleek and stunning aesthetic. This mod kit is sturdy, high-quality, and constructed with pieces that do not easily flex or break during usage. In less than one hour, you can quickly set up.

Only the modification kits are available; the M4 appears compatible with the Nerf Stryfe Blaster in transformation and customization. Give your blaster a great new style and design to add to the excitement of Nerf battles and games. The mod kit can be set up in minutes. 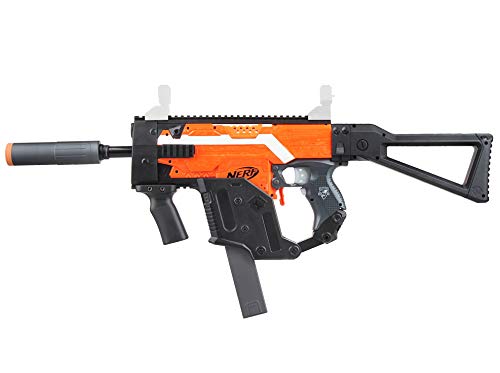 The JGCWorker Nerf Stryfe Mod Kits Set is compatible with the Nerf Stryfe. It is a model mod kit in the AK style that takes your style to the next level, making it cooler, faster, and more thrilling. This kit is manufactured of ABS plastic, a tough and durable material; as a result, it is ideal for outdoor play. 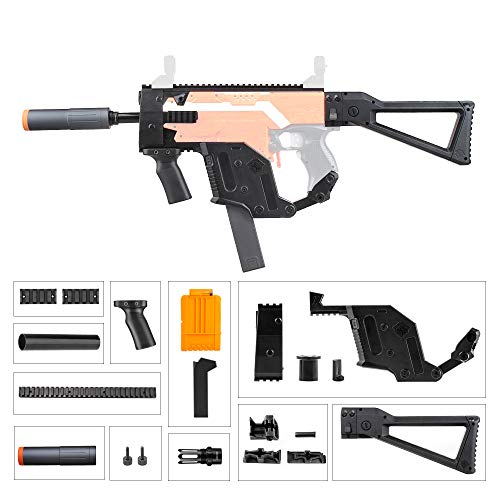 The Nerf Modulus Stealth Upgrade Kit provides the best blaster performance for your Nerf gun. The mega Whistler Darts rip through the air with the Mega Series blasters. With Zombie strike blasters, you can repel a zombie invasion; it also comes with a fire vision sporting clothing that illuminates when thrown and will light up the night. 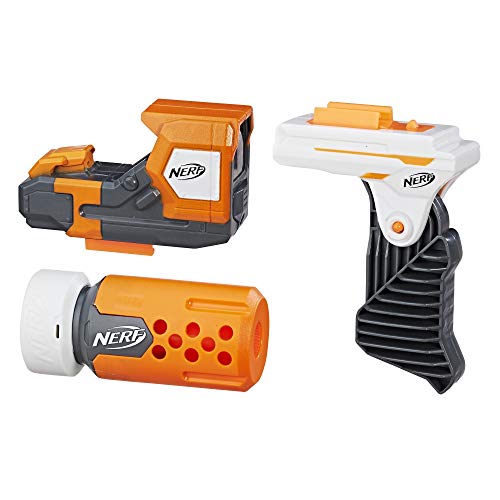 How To Modify A Nerf Gun

It is a lot easier than most people believe; with practically any Nerf gun available, there are three fundamental things you can accomplish. Make the spring tougher, remove or modify the air restrictors from the barrel, and substitute it with a brass pipe.

All of these things are done to increase the force of your shot so that when you shoot a dart, it will travel further. You can even make your darts, known as Stefans, to use. The first step in modification is to make your nerf gun spring; to do so, detach the blaster while being careful not to lose it.

To keep them safe, place them in a yogurt plastic; divide the shell halves after unscrewing them at the shell. There are internal bolts and nuts; inside the pulling mechanism, you will also locate springs. It is in the middle; you can significantly buy many 20-pound springs to boost your shot’s strength.

Since the kick will render the gun even stronger, you might have to reinforce it with PVC pipe eventually if you do not want it to come apart. Then all you have to do is reinstall the screws, and you are done; it is not difficult to locate the spring on your rifle. The next part of the modification is to remove air restrictions.

Air Restrictors are plastic components that absorb around half of the energy you input into the shot and then discard it. A Phillips Head screwdriver, a long bit, and a drill are all you will need; reassemble the rifle by unscrewing the screws and memorizing where they would go. Drill in the needle section, and you will have no air constraints, allowing you to shoot farther than you could ever imagine; remember to put the gun back together.

Modding the barrel is another simple modification for nerf guns. The majority of the barrels are composed of low-cost polyethylene that does not contain air. Using a brass barrel that fits your darts better will permit more air to accumulate behind the dart, resulting in more power and longer shots. Remove the barrel and substitute it with one made of brass; this takes roughly 15 minutes to complete.

While some individuals prefer the way Nerf guns look, some like to customize their weapons to make them look futuristic or unique. Many people use paint and decal to personalize their Nerf guns; it is not as popular as performance hacks, but it is becoming more popular in the modding scene.

Creating Stefans, also known as homemade nerf darts, is another modification for Nerf guns. Half an inch of foam backer rod is commonly used to make nerf darts. Grab a 20-foot bag from your neighborhood hardware store, and you have got 20 feet of darts, but you need to poke a hole in one of them. So, for each, you have roughly 75 in each bag.

Using a pillowcase and a blow dryer, cut and straighten the darts; allow the pillowcase to cool after using the dryer for about a minute or two and shake them. Create small holes in the center with a glue gun, insert a BB, and then bond the BB to load it up.

The Worker Hyperfire Flywheel Mod Kit Set is compatible with the Elite N-Strike Infinus. Metal is used to make this item; the darts revolve due to the tilted cage structure, which increases accuracy and range. The high-capacity motor can be powered by a lithium-ion battery ranging from 11.1 to 12.8 volts.

The projectile motion is straighter and smoother because the internal diameter of the 17 mm aluminum tubing R angle links to the flywheel bin. The toy rotates due to the flywheel slope design; it has a 34.8mm flywheel diameter. This nerf gun mod kit weighs 280grams and is blue.

This kit comes with an adjustable step-down module, a heat sink, a resistance, a fuse, a secondary tube, two flywheels, two motors, a field-effect transistor, a pack of wire, an insulation pad, and a flywheel bin. The package includes a self-recovery fuse that disengages the circuit whenever the current hits 15A and takes 15 to 30 seconds to recover.

The highest current and voltage that it can withstand are 40A and 30V, respectively; this kit can be used with the Nerf Stryfe. No changes are needed for the Nerf Elite N-Strike Infinus because it already has a fully automated launch system.

Modding nerf guns and making your homemade darts are convenient and simple methods to enjoy your nerf gun fully. Using a Nerf gun mod kit will greatly help you as you will be able to make different modifications and changes as you desire to your nerf gun. Modifying a nerf gun is a simple task once you have the right kits, you can purchase any of the kits mentioned above.