Nitro RC trucks have several features that differentiate them from electric RC trucks. It would help if you were wary about the engine size, the weight, the size, the physical properties, and the speed of the RC truck. These factors determine which nitro RC truck will be suitable for you.

Nitro RC trucks use an engine fueled by methanol-based fuel that contains nitromethane. Nitro engines, unlike electric motors, are powered by fuel rather than batteries. Nitro engines have air filters, pistons, clutches, carburetors, crankshafts, flywheels, and glow plugs just like full-sized gasoline-powered cars and trucks do.

What Is The Fastest Nitro RC Truck?

The speed of a nitro RC truck depends on some factors, including the engine type, the gear ratio, the car's overall weight, and the battery. However, it would be best to keep in mind that you can make improvements and modifications to the vehicle to make it go faster. Let us look at the fastest nitro RC truck on the market.

Traxxas Rustler 2WD Truck is a 1:10 scale vehicle powered by the Traxxas 2.5 racing engine. It is a ready-to-race RC nitro truck that uses a 2 wheel drive system. This vehicle also delivers plenty of torque for ruthless acceleration and wheel-standing launches. The Traxxas Rustler can reach a top speed of over 50 mph.

The sleek body design defies the wind while the wild graphics take center stage with smooth contours and a low slung stance. The separable wing is securely bolted to the body with precision aluminum hex hardware. On a range of surfaces, the high-tech rubber compound provides excellent grip.

Gray molded composite elements have been meticulously integrated to improve the chassis' appearance. Nitro rustler's power sliding dirt roosting attitude will have you reaching for the throttle time and time again. Due to the Traxxas Stability Management, this RC truck can corner faster, accelerate faster, stay in control, and brake harder.

What Is The Biggest Nitro RC Truck?

Exceed RC 1/8 Monster Nitro RC Truck features some remarkable and innovative details that demonstrate why the brand is one of the best on the market. Exceed nitro RC trucks have the most advanced features and functionality in this generation. This RC truck is fitted with a level 28 engine, ensuring speed.

It has a polished metal chassis for sturdiness and a sleek appearance; it also features a larger fuel tank that allows its engine to run longer. This RC nitro truck is a 1/8 scale vehicle with a gorgeous look and a well-built interior that adds to its impressiveness.

Every truck component has been designed to last long from the back bumper to the front bumper. This truck is also equipped with an aluminum muffler for improved appearance and protection. It comes with a tough metal gear steering servo, massive tires, and chrome rims that allow operation over the most difficult terrain.

What Is The Biggest Nitro RC Engine?

Traxxas is a brand that comes to mind when you think of the top RC car and accessory manufacturer. Their products are designed to focus on innovation, performance, and quality. Hence, it is not surprising that a Traxxas engine will be the biggest nitro RC engine. This engine is a two-horsepower motor.

The Traxxas 5407 3.3 Nitro Engine is the engine to use if you want a huge engine with unparalleled support, reliability, and high power that is simple to use. This engine has a higher horsepower output than prior generations and exceptional race engine performance.

There is reduced wear and tear, and the engine life is increased due to the piston and sleeve of the engine, which are produced from a proprietary material. It has a Traxxas EZ-Start electric starter and a high-performance slide carburetor with less restricted airflow, leading to improved throttle response and more power.

This nitro RC engine's crankcase is unique, featuring improved porting and cooling modifications that increase the engine's power output. Its external dimensions allow it to be utilized where a TRX 2.5R or TRX 2.5 engine was previously fitted. The engine temperature remains stable because of the equal heat distribution provided by the aluminum cooling head. 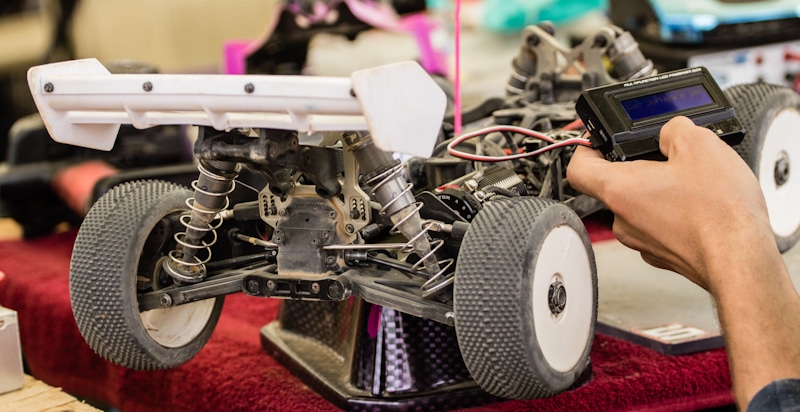 Is Nitro RC Faster Than Electric?

On the other hand, electric RC cars are produced from carbon fiber parts rather than aluminum, making them lighter than nitro RC cars. The weight of an RC car affects its speed; hence, an electric RC car will be faster than a nitro RC car because it is lighter. NiMH or LiPo batteries power electric RC cars, which may run for up to 3o minutes.

You will appreciate the added realism of a nitro truck's smoke and roar if you are enthusiastic about RC vehicles. The main advantage of this vehicle is that you may operate it for as long as you want; all you have to do is refill the tank when it runs out. Nitro RC trucks are the way to go if you want a more intense and realistic experience with your RC car.