A dirt bike is a light bike built for riding on uneven or off-road terrain such as rocks, mud, sand, and grass. They are also referred to as off-terrain motorcycles; they have various characteristics that distinguish them from normal motorcycles. There are different types of dirt bikes, each with a different riding style.

There are eight different types of dirt bikes; each has its distinct features and some titles are an accurate description of their uses. These dirt bike types are Enduro bikes, Flat track bikes, Trail bikes, Dual sport bikes, Supermoto bikes, Trials bikes, Hill climb bikes, and Motocross bikes.

With such a large and diverse range of dirt motorcycles available today, it might be difficult to sort through the various dirt bike kinds and choose one appropriate for you. Knowing the different types and uses is important. 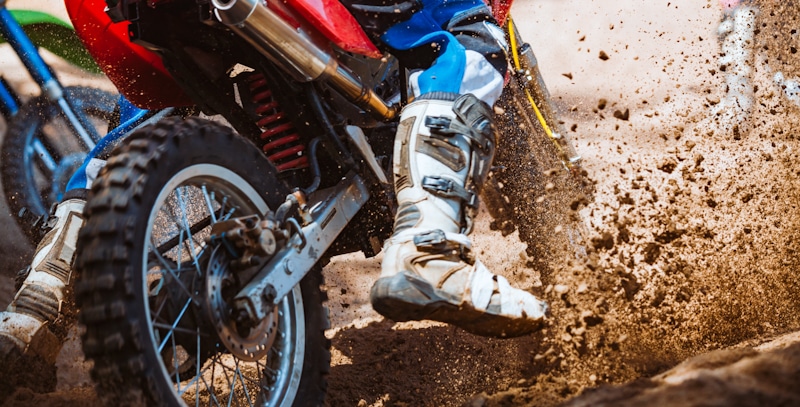 What Are The Different Types Of Dirt Bikes?

Before getting into the various dirt bike alternatives, it is important to learn what a dirt bike is and the riding type it was designed for. Dirt bikes are a type of motorbike intended specifically for going off-road. It has distinct characteristics that set it apart from ordinary street bikes.

Dirt bikes feature knobby tires, come with thinner and flatter seats, a smaller petrol tank, and more suspensions. They also have a unique chassis and frame and a slightly shorter wheelbase, which helps them manage at lower speeds. Having understood what a dirt bike is, let us look at the different types of dirt bikes.

Motocross bikes are built specifically for competitive racing on a confined circuit. Natural terrain courses or artificial circuits in stadiums are the two types of tracks. The long-travel suspension travel, normally approximately 12 inches, knobby tires for maximum grip, and lightweight bodywork and frame are all obvious aesthetic contrasts.

They do not have mirrors, lights, a kickstand, or a speedometer, and they do not usually have an electric start because they are not meant for the road. For optimal acceleration, the weight is maintained, and the gearing is lower. The seat is considerably stiffer, grippier, and flatter than the other dirt bike types.

However, because most of the time racing is spent standing, comfort is not a key consideration. Motocross riders can now do massive leaps because of recent brake technology and suspension advancements.

The most prevalent dirt bike type is the trail bike. Trail bikes are meant for off-road cycling across medium to long distances; they have lower seat height, smoother power output, softer suspension, a larger gas tank, and a large radiator than road bikes. Trail bikes are frequently equipped with headlights for night riding.

A side stand is frequently included as standard equipment on trail bikes. Enduro bikes and trail bikes have a lot in common. The footpegs are in a natural position for a more pleasant ride, and the handlebars are raised to make slow-speed turning easier. Trail bikes are light with minimal plastic construction, lengthy suspensions, and wider tires.

This type of dirt bike performs better than any other on a range of dirt surfaces. Trail bikes are the best choice for beginner riders because they are easy to operate. The most popular trail dirt bikes are Honda CRF230F, Kawasaki KLX 300R, Yamaha TTR230, and KTM 300 XCW.

An enduro bike is a trail type of bike modified and designed for racing and hare scramble competitions. It is usually more expensive than trail bikes; however, it includes much technology found on motocross dirt bikes. This type of dirt bike is used for enduro events; as the name implies are endurance tests that last for several days.

Enduro bikes are normally legal on the streets; they have small compact lights, mirrors, street-legal tires, indicators, and a quiet exhaust system. They may have street-legal knobby tires, but they are better suited to rougher terrain for off-road use. They are designed for racing but can also be used for trail riding.

Flat Track Bikes are designed specifically for racing on flat and smooth terrains; you can use them on a TT flat or oval track course. These bikes are those that have been totally customized or heavily modified. You can easily drift with these vehicles at exceptionally high speed due to their flat track, specialized tires, and reduced suspension.

Flat track racing resembles speedway racing, but it is not the same. In beginners' competitions, flat-track dirt bikes can use two-stroke or four-stroke engines. These vehicles come with rear brakes and rear and front suspensions.

A trail bike is significantly different from a trail bike; these bikes are a unique type of bike that is not based on speed. Trials contests or events are intended to put a dirt bike rider's control and skills on the bike to test. Trial bike riders usually launch over obstacles that would appear impossible on a standard dirt bike with throttle control and clutch.

Trial bikes are set up and built considerably differently from other dirt bikes, making them easy to identify. Many of the finest enduro racers began their careers on trials bikes, which are terrific training tools. Riding a dirt bike on challenging terrain will be easier if you develop your clutch, throttle, and balance control.

Dual-sport bikes are outfitted with turn mirrors, speedometers, headlights, and turn signals. They are meant to operate better than a street bike over rough terrain while being quieter and smoother than one on asphalt surfaces. Due to their lighter weight and simplicity, a single-cylinder engine is used for most dual sportbikes.

A Supermoto bike has slick street tires and looks like an off-road dirt bike. A Supermoto bike is a road-legal dirt bike equipped with headlights, indicators, and taillights. These types of bikes are frequently used on terrains filled with tar and dirt; compared to other types of dirt bikes, Supermoto bikes are agile and light.

Hill climb bikes have a very distinct design in terms of appearance and functionality; it is built to tackle extreme uphill. An expanded swing arm has been added to the bike, making it difficult to flip and wheelie; this also improves its ability to maintain traction when climbing a hill.

How Many Types Of Dirt Bikes Are There?

There are eight types of dirt bikes; each type has its unique characteristics, capabilities, and usage. What you might use a trail bike for might not be done with a Supermoto bike. The eight types of bikes are all different, some might look like the others, but they are not the same. You must know the features of each type as that will guide you when you are looking to purchase your dirt bike.

Similar post: Can You Ride Dirt Bikes on the Road? Everything You Need to Know

With this knowledge, you should be able to recognize the various types of dirt bikes. Buying your first dirt bike necessitates many investigations; your decision will be easier when you know the suitable type of dirt bike for you. The capabilities of each type of dirt bike and the terrain they are suitable for allow you to know which is best for you.