Today drones are being used in many different industries to accomplish many different tasks. This is great news because drones typically significantly improve upon those tasks. One such industry that's starting to use drones more frequently is journalism.

It is legal to use drones in journalism today. Many news broadcasters are starting to do so. They're especially popular when capturing news events like volcanic eruptions, war-torn villages, and natural disasters because they're a safe way of recording this type of news footage today. 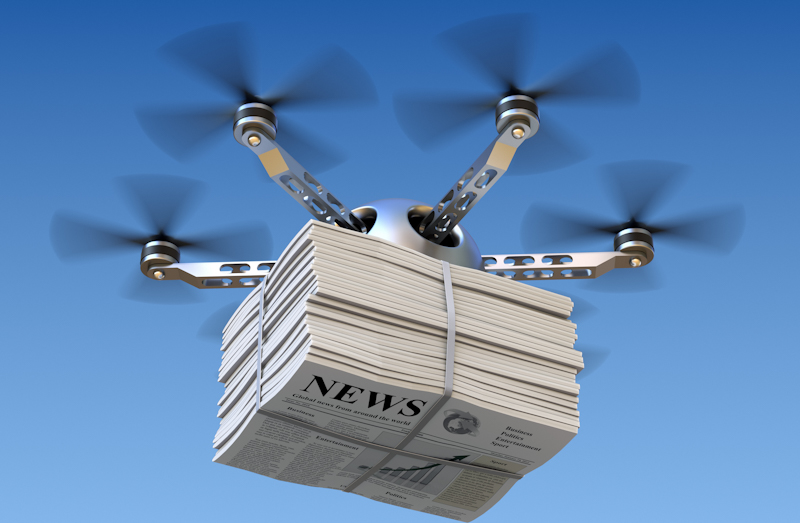 What Drone Journalism Is

Drone journalism is the use of drones for journalistic purposes. Using drones to help collect information is still a relatively new practice today. In the past, reporters would need to be in a helicopter if they wanted to capture any aerial footage. Oftentimes they'd need to rent these helicopters which meant that their production costs would be higher. Now that drones are being used in journalism more frequently not only are costs being reigned in but journalists are also able to get more exciting footage of things like war-torn villages, volcanic eruptions, and other natural disasters. When it comes to capturing this type of footage it's also much safer to use a drone to do so.

The Initial Use of Drones in Journalism

Back in 2012, when drones were first in use in the United States the FAA (Federal Aviation Administration) mandated that they were only to be flown in certain areas. You also had to be a licensed pilot to be able to fly them. We've come a long way since then. Now drones can be flown anywhere except in designated no-fly zones. You also don't need to have a pilot's license to be able to fly them.

One of the first news agencies to make use of drone journalism was BBC news in 2013. However, in mid-2016 CNN soon followed. Not only has CNN used drones for reporting the news but they've also been instrumental in helping determine what role drones will play in the field of journalism. Since they first started using drones to report the news, CNN has used them to help find earthquake-affected villages in Nepal. This is one example of the numerous ways in which CNN has helped local authorities provide humanitarian relief to those who've been affected by natural disasters over the years.

Journalists are to have a pilot's license under FAA's Part 107 law in order to be allowed to do fly their drones. To take this exam you must be at least 16-years-old and be able to read, write, speak, and understand English. To obtain this special remote pilot certificate you're required to pass a 60-question exam that's administered by a flight school. This exam reviews all of the topics that are necessary for safely and successfully flying a drone for commercial purposes (e.g. weather, mapping, FAA regulations, how to identify the various "Classes" of our National Airspace System).

Journalists are also required to submit to a background check that's conducted by the TSA (Transportation Security Administration). They must also register their drones with the FAA if they weigh over 55 pounds.

While Part 107 makes it easier for journalists to fly drones, there are still a lot of constraints they must abide by. For instance, according to Part 107 journalists still can't fly their drones over a crowd. This is something that's important for drone journalists to know since they may find themselves covering a news story whereby a crowd of people has gathered. Sometimes you can request a waiver (COA: certificate of authorization) to fly your drone over the top of members of the general public but the FAA won't always grant them or you may not receive one in time to capture your news story.

Another constraint under Part 107 has to do with flying your drone at night. This constraint was put into place due to safety issues. When you fly your drone at night the distance that you're able to see is dramatically reduced. Even your visual observers (additional flight crew members) can't see as far as they'd be able to see in the daytime. As such, Part 107 has prohibited commercial drone pilots from flying at night. However, recreational drone pilots are allowed to fly at night as long as they've equipped the drone with lighting that enables them to see its location at all times. The best way for you to circumvent this law as a journalist is to apply for a waiver.

Drone journalism has enabled journalists to obtain relatively inexpensive aerial photography and videography for use in their stories. This has enabled journalists to explore new ways of collecting data and using this technology in their reporting. Many believe that the full potential that lies behind the use of drones is something that we haven't been able to fully explore yet.

We've already been able to witness the use of drones in creating new opportunities for multispectral photography and powerful storytelling moments that have helped transport readers to new places whereby they're given new insight.

Another important advantage that journalists have when engaging in drone journalism is its cost-effectiveness. While it costs a lot of money to use helicopters to capture aerial photography, drones don't cost nearly as much. This has enabled small news sources to be able to conduct the same type of investigation and capture the same images that were once only available to larger news sources.

With drone journalism, it's also possible to illustrate the extent to which natural or man-made disasters have impacted people and their environment. It's now also possible to use drone photography to create maps of these areas to use in explaining how something like a storm has truly changed a community.

One of the main reasons why we aren't seeing a lot of drones being used in journalism today is due to the complex regulatory environment that surrounds their use. There are also still some ethical issues regarding privacy and the use of drones. Other concerns that have been brought to the table include the fact that drones may cause a safety hazard, especially when journalists are using them in heavily populated areas. Unfortunately, some of these issues have arisen due to fear.

Each country's aviation authority is responsible for regulating drone flight. Since these regulations can vary depending upon what country you're in it can be difficult for global media organizations to use drones in various countries. There have been some efforts made in regard to harmonizing these regulations but this will take some time.

Some citizens are also concerned about the type of images that drones are able to capture. This is because drones have high-end cameras attached to them. These cameras can easily capture unrestricted views that do have the potential of being misused. Unfortunately, some private landowners have banned the use of drones over their property for this reason.

There have also been a lot of ethical considerations regarding the use of drones in journalism today. One of the main reasons for this is that citizens are concerned with protecting their privacy. As public opinion remains a concern for journalists everywhere, it's important to note that this isn't something journalists are taking lightly. Instead, most drone journalists have accepted a code of ethics today that states the following:

The future of drones seems likely, especially when you stop to consider just how beneficial they can be. This is why drones are being used in many different industries today. Journalism is just one of them. Many journalists are now legally using drones to capture events like volcanic eruptions, war-torn villages, and natural disasters. This is great news not only because it helps significantly improve on the footage that's captured but it's also safer for the journalists who are involved.