An all-terrain vehicle or ATV has several names in different countries. Sometimes it is known as a LUV or light utility vehicle, quad bike, or just quad. Even if it has different identifications, there is a common issue that is bogging down, especially when giving gas.

Aside from these reasons, there are also other reasons why an ATV bog down. In this article, we will list all possible causes of an ATV bogging down, especially when giving gas and how to fix these causes.

Why Does an ATV Bog Down, and How to Fix It?

There can be a multitude of reasons why an ATV bog downs. The common reasons are when airflow or fuel is inefficient or when the ignition to the carburetor is insufficient. In these cases, it means that the air filter is dirty, as well as the carburetor. The solutions to these issues are simple and are as follows:

The issue of bogging down is usually gone after this. If you are unsure about how to do this, several shops can fix a carburetor at a low cost.

We also can't exclude driver error, especially when it's a first-time rider. The remedy for this instance would be consistent practice with the ATV.

As mentioned earlier, an ATV bogs down when airflow or fuel is inefficient or when the ignition to the carburetor is insufficient. Notwithstanding these issues, there are also other causes why an ATV bogs down, most noticeably when giving gas. The ATV starts well, stays strong while idle but suddenly bogs down when giving gas. A dirty air filter or carburetor may be the reason for this, thus requiring the same solutions. 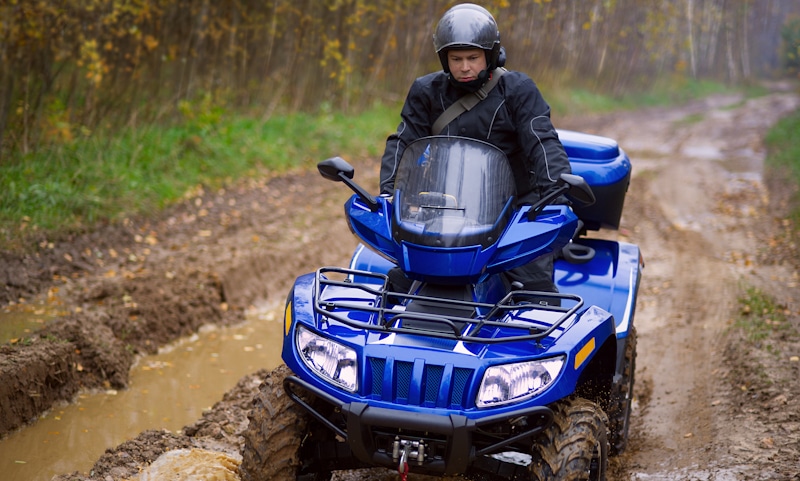 A Bit More About ATV’s

The all-terrain vehicle or ATV, LUV, quad bike, or quad is a street-legal vehicle in several countries, but in some states and territories, it is not road-worthy and cannot be used on public roads. This means that ATVs can only be used on private roads or areas.

This vehicle travels on low-pressure tires; its seat is straddled by an operator who uses the handlebars for steering control. The ATV was a popular sports vehicle early in its inception but gained wider popularity during the 1970s when it was used in agriculture and farming as a tractor alternative.

The ATV can be traced back to the 19th century when Royal Enfield, a brand name in Worcestershire, sold motorcycles, bicycles, and sold the first powered quadricycle. It's designed as a horseless carriage for road use. Then in the 1960s to early 1970s, the term "ATV" was coined but referred to non-straddle-ridden, usually six-wheeled amphibious ATVs.

Also, within this timeframe, the first three-wheeled ATV, which was straddle-ridden with a sit-in style, was introduced. However, the three-wheeled ATV, called ATC or all-terrain cycle, ceased production by 1987 due to safety concerns.

The existing four-wheeler ATVs were first sold in the 1980s. Since then, they are in production and continuously being upgraded to cater to the different needs of its riders. One of its innovations is an age-specific ATV. Most ATV manufacturers are now conscious of the age range of their riders and developed ATVs for a specific age group. If the rider is in their teens, a Youth ATV would be an appropriate ATV since this vehicle is optimized for them.

With its long history and never-ending advancements in its mechanical engineering and modernizations in its usage, an ATV is still susceptible to breaking down. Like any other vehicle or machine, the wear and tear will eventually take its toll.

The all-terrain vehicle is a welcome addition to the existing modes of transportation in our human history. Its invention can be traced back to the 19th century, but modern models were introduced to the market in the 1980s. It has several uses, from agricultural and farming to recreational and competitive riding.

Despite the advances in the implemented technology for ATVs, it is not an indestructible vehicle and still faces issues with its functionality after long-term use.

The most common cause of an ATV bog down is a dirty air filter and/or dirty carburetor. These issues also apply to instances of bog down when giving gas. The solution to these issues is cleaning the air filter and carburetor or buying a new one when no longer possible. It is also advisable to use seafoam once in a while to maintain the cleanliness of the carburetor.

It is also possible that the ATV bogs down due to driver error. This is common with first-time riders. With consistent practice over time, driver error will no longer be a cause for ATV bog down.

Aside from these common issues, another set of issues were presented, which may cause bog down when giving gas and their respective solutions to fix these problems. These are (a) dirty gas tank, (b) dirty pump screen, and (c) warm emission system. The solutions were (a) cleaning the gas tank, (b) examining the pump screen, and (c) letting a professional mechanic check the emission system of the ATV.

Newly bought ATV will rarely present these issues. However, if they do, it is best to visit a professional mechanic who can investigate your vehicle and make sure that your safety will not be compromised. Always ride safely and responsibly.