Drones are getting quite popular among the masses for both professional and recreational use. There are several benefits to a drone, but negatives tag along as well – particularly if you’re not skilled at controlling the uncrewed aircraft remotely. And if you’re flying a drone anywhere close to a school, you need more than just good drone-flying skills.

Whether you can fly a drone near a school depends on the drone rules applicable in your region. Registering your drone with the FAA, remote pilot certification, or school permission are needed. The other significant aspect to consider is where you’ll fly the drone or how close to the institution.

A drone is an unmanned aerial vehicle (UAV) that can be manually controlled from a distance or using AI (artificial intelligence). But there are limitations on where, when, and how you can fly the drone as airspace is not as open or accessible as most imagine. Keep reading to learn everything there is to fly a drone above or close to a school.

Before delving into the issue of flying drones close to a school, it’s imperative to get a basic overview of general drone flying rules. In other words, there are certain things you should know before heading out with your UAV.

A drone should fly only at or below a specific altitude – usually set at 400 feet (121 meters) from the ground. This limit ensures the drone is least likely to come in contact with airplanes, helicopters, etc. The maximum flying height could vary across countries, but it’s pretty much 400 feet everywhere – including Canada, Australia, and Europe.

Make Sure the Drone is in Sight Always

If your drone is visible in the sky, it’s very likely under the 400 feet maximum height limit. Else, it can be challenging to ascertain whether the drone has breached the 121-meter mark in the sky or not.

Having the drone visible in the sky always implies it’s not recommended to fly your drone when it’s foggy or cloudy outside.

Also, do not fly your drone in the dark, or 30 minutes after proper sunset, or 30 minutes prior to sunrise. Adhering to these timings is not mandatory, however.

Generally, don’t venture out with your drone if artificial lights are on in the locality or people’s houses. Even if your UAV has night lights, wait until it’s naturally bright again.

While it’s tempting to take your drone over humans on a beach or any other busy locality to get a bird’s eye perspective of things, it’s not safe and also against the law to fly your UAV over unwary people. “People”, in this context, could mean a crowd or a single person.

If you don’t have the required permission, the drone should always avoid public gatherings, busy stadiums, community events, etc. It’s okay to fly your drone above people only if they are with you or a part of your shooting crew.

Besides the above, get in touch with local authorities to know more about flying drones in your region. If the city or state you live in has no proper drone flying guidelines in place (which is unlikely), refer to the country-level aviation laws and rules.

In the U.S., the Federal Aviation Administration (FAA) regulates all civil aviation aspects, including UAVs. The governmental body is in charge of all airspace in the country. The concerned city, local community, state, county, and even the federal government have zero control or jurisdiction over the sky.

The drone’s weight ascertains whether you’d need proper permission to fly. In Australia, for example, drones that weigh more than 250g (0.55 lbs) must be registered, and drone flyers should have proper accreditation even if the flying is for non-commercial or educational purposes. The aforementioned drone registration rule is mandated by the FAA as well.

Individuals who are 16 years old or above should clear an aeronautical knowledge exam at any FAA-recognized knowledge testing center. After clearing the test, the concerned person can apply online for a remote pilot certificate. The certification is not mandatory, but registering the drone with the FAA is required.

Even if the drone is registered with the FAA and the drone operator is duly accredited, schools can still restrict drones in its space that aren’t owned and operated by them. Some schools may even have signages to alert or warn the campus community and outsiders about the drone flying restrictions in or near their campus.

Airports usually deny drone use within five miles of their radius. Schools can have such prohibitions in place as well. 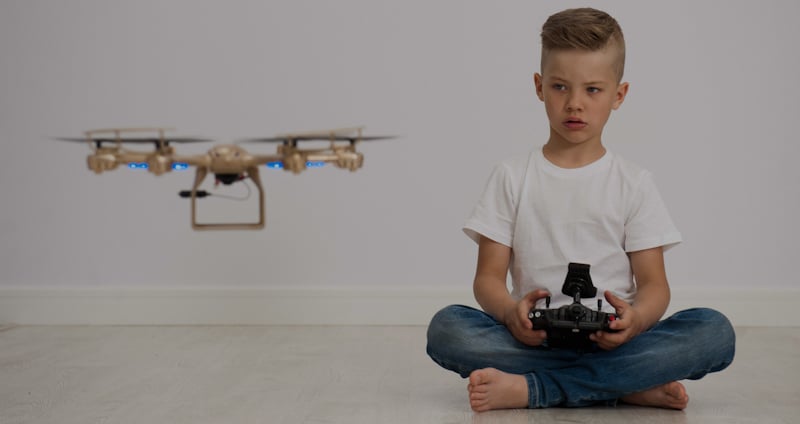 What Harm/Violations Can Drones Possibly Cause

A school is considered a “sensitive” zone, falling in the same group as a power plant, hospital, etc. The risks attached to flying a drone near a school or right in its air space are:

To learn more about why it’s not safe to fly a drone near or close to a school, it’s essential to understand the possible issues drones can present.

Incidents in the past wherein drones have crashed into airplanes, into people’s faces, etc., are not necessarily rare. Drones that hit people in their face are likely to cause cuts, lacerations, and bruises. One cannot rule out eye damage either. Fatalities are, however, extremely rare.

Getting hit by a quadcopter’s pointy rotor arm is the biggest fear of most people scared of getting hit by a drone. Fortunately, it’s tested and found that drones spin away from the point of the strike during a hit, taking kinetic energy along. In other words, during a crash, the drone body is likely to be damaged more than the person coming in contact with the UVA.

If your UAV has a camera, it’s theoretically a camera. As a consequence, all privacy laws would come into play. If you are not allowed to snap pictures of people without permission, a flying camera will not afford you that privilege.

Though a drone’s wide-angle lens doesn’t capture human subjects as clearly or effectively as it snaps landscapes and nature, most people are not aware of that. The mere sight of a drone pointing at them can freak them out. Camera privacy laws, therefore, apply to drones as well.

Flying a Drone in or Near a School – Things to Know

Flying a “model aircraft” or a proper drone in school for educational purposes is fine if the school management and/or students are directly involved and if the activity is performed under an expert’s supervision – who is usually appointed by the school.

Suppose the drone doesn’t belong to the school. In that case, it cannot fly over the institution’s campus without proper permission from the concerned authorities, as there’s the risk of the UAV crashing and descending and damaging school property or hurting students.

As mentioned above, there are privacy concerns – which is more so with school students. Strangers with remotely-controlled cameras and vulnerable kids can be a sensitive topic. When kids or students are not on campus, it may be okay to capture drone shots of schoolyards – i.e., only if the school permits.

Drone Operations Conducted by the School Itself

Besides learning, many schools and colleges employ drones for campus security, promotional videography, etc. Some schools record aerial perspectives of their campuses to review certain events, such as a marching band practice. The drones could also be employed for conducting rooftop inspections.

If there’s a commercial element involved, the school should seek proper permission from the local authorities, and a licensed drone operator must be in charge of the mini flight. The school’s students can partake in such commercial undertakings only as spectators.

If the school leases or owns the land where it intends to fly, it may operate without approvals and permissions from a local body. But then the rules for the same may vary across states and countries.

Though drone technology has considerably improved over the years, it’s still not at a stage where anyone or everyone without training or accreditation can fly a drone – certainly not for commercial reasons or above restricted properties. When the device is not handled by the right person, a drone can cause damage, both to property and life.

If you’re considering flying a drone near or above a school, ascertain beforehand the flight’s purpose (commercial or educational), the drone’s size and weight, etc. Most importantly, get formal permission from the school or ensure the institution’s authorities are in the know.

Approval from the local administration is, of course, mandatory before you could launch your drone in the sky.